Heritage and Cultures in Modern Namibia. In-depth Views of the Country, by Cornelia Limpricht and Megan Biesele 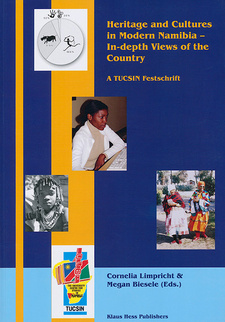 The introduction of the Festschrift Heritage and Cultures in Modern Namibia is started with a preface by Cornelia Limpricht and Megan Biesele.

Jubilees are a good opportunity for giving account and for presenting an outlook. In this case a scientific Festschrift comprising research results is to be submitted to a broad spectrum of the Namibian public. All along TUCSIN has offered us scientists from abroad a base from which to operate, as well as support and encouragement in our work. In this regard Dr. Beatrice  Sandelowsky, who together with other Namibians founded TUCSIN in 1978, has played a vital role. Consequently this Festschrift is dedicated to her and to TUCSIN. Growing up on a farm on the edge of the Namib Desert the lively and inquisitive girl started to be taught by her mother at a very early age. Jokingly her father enjoyed telling people that his daughter's first coherent sentence had been: "Pass me the encyclopedia." The anecdote reflects two consistent character traits: curiosity and a thirst for knowledge. Two other characteristics should be added: perseverance and the conviction that everybody can reach targeted goals. Therefore she was not discouraged when she was said to be 'crazy' for wanting to be an archaeologist. She submitted, temporarily, to studies of something which was seen as respectable for women: primary school teaching. However, she took the first chance to study archaeology in America. Her studies focused on African archaeology and were completed with a doctoral thesis on the Later Stone Age in Malawi. On her return to southern Africa in the late 1960s she was employed at the State Museum (now the National Museum) in Windhoek. Three years later she was a senior lecturer at the University of the Western Cape, a university for coloured students at that time. Her free spirit and friendships beyond racial borders drew negative reactions at both institutions. To make things worse archaeology was a suspect subject under the apartheid system. In the late 1970s she was practically banned from pursuing her career because her permits for excavations in SWA-Namibia were withdrawn. Expelled from two major institutions, she had to re-orientate herself This is when TUCSIN and later the Rehoboth Museum came into play.

TUCSIN (The University Centre for Studies in Namibia)

In 1978 a group of like-minded people established an educational institution in anticipation of a Namibian university to be founded at a later stage.3 In the meantime the organization was committed to improving the quality of education of so called 'non-whites'. Although statutory apartheid had been abolished in the same year (otherwise TUCSIN could not have been founded), SWA-Namibia still remained a deeply divided society where blacks faced massive disadvantages, amongst others, within the educational system. The establishment of the organization was a completely private initiative. For a few years TUCSIN was supported exclusively by a handful of people in the private sector. Here tribute must be paid to Robert Camby, a consultant engineer, who was the first elected chairman, and whose enthusiasm convinced a number of skeptics to join. The first bursaries for university study were privately donated. There were very few applicants. On account of the poor education system most of them could not satisfy the entry requirements of good universities. Consequently TUCSIN designed an upgrading course for school leavers who had failed the final examination. In 1984 the first full time course was offered to eight students taking six subjects in which they would be re-examined. [...]

This is an excerpt from the book: Heritage and Cultures in Modern Namibia. In-depth Views of the Country, by Cornelia Limpricht and Megan Biesele.