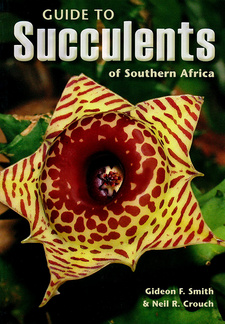 Succulents have attracted considerable attention over the past centuries for, among other things, their often bizarre forms. And with nearly half of the world's succulents occurring in southern Africa, the region is the primary hotspot for this life form. This guide was edited by Gideon F. Smith and Neil R. Crouch.

Succulents are plants that store water in one, or all, of three organs - their roots, stems or leaves - to enable them to survive droughts. In some species, the continuum between the roots and stem becomes swollen and expanded to form a so-called caudex. When these 'caudiciform' succulents are cultivated with their fat 'feet' exposed, the plants make spectacular specimens. However, two mainstays of succulents in general are the leaf and stem succulents. Other types less commonly encountered - succulent inflorescences and above-ground bulbs. Succulents have attracted considerable attention over the past centuries for, among other things, their often bizarre forms. And with nearly half of the world's succulents occurring in southern Africa, the region is the primary hotspot for this life form.

Distribution of succulents in Southern Africa

Succulent plants are distributed over the whole of southern Africa from the highest mountain top to the southernmost tip of the subcontinent, and from the arid west to subtropical forests in the east. The succulent plants from the warm-temperate western regions are mainly leaf succulents, whereas stem succulents are more common in the warmer, subtropical eastern parts of South Africa. The greatest concentration of succulent plants is found in the warm-temperate, semi-arid, winter-rainfall region known as the Succulent Karoo. Within this region, the Richtersveld, Namaqualand, Knersvlakte, Worcester-Robertson Karoo and the little Karoo harbour particularly high numbers of succulents. Over 1 000 species of the Mesembryanthemaceae (also known as mesembs, midday flowers or vygies) occur in this area. The southwestern Cape fynbos vegetation and the impenetrable thickets of the Eastern Cape are also surprisingly rich in succulent plant species, as are the Great and Upper Karoos, as well as the Bushmanland region, which all receive rainfall mainly in summer. Other regions noteworthy for their succulent plant riches include the northern and eastern subtropical summer-rainfall regions of southern Africa, the arid bushveld of river valleys in Mpumalanga, the thornveld of KwaZulu-Natal and the thickets of the eastern seaboard. Among the succulent plant families well represented in these regions are the Asphodelaceae (the aloes and their relatives), Apocynaceae (carrion flowers), Passifloraceae (passion flowers) and Lamiaceae (mints). Grasslands, too, have a high diversity of succulent plants, especially caudiciforms - succulents with large or small footlike basal swellings - and some of the smaller crassulas and stapeliads, and even a few vygies. In contrast, the subtropical and warm-temperate forest regions have comparatively lower numbers of succulents, exceptions being the leaf succulent species of Crassulaceae and Piperaceae. A number of succulents from other parts of the world have become naturalised in southern Africa, following their introduction by humans. Many of these plants are highly invasive and should not be cultivated. The maps accompanying the species accounts reflect present-day distribution data, but are bound to change as alien plants tend to colonise suitable habitats vigorously. In the text, alien species are marked with the symbol ©. [...]

This is an excerpt from the Guide to succulents of Southern Africa, by Gideon F. Smith and Neil R. Crouch.