Guide to Night Skies of Southern Africa, by Peter Mack 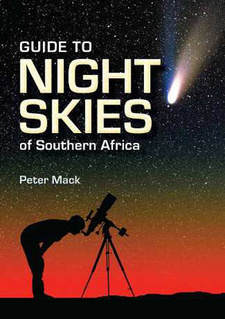 This new edition of Guide to Night Skies of Southern Africa by Peter Mack, is set to enjoy the acclaim and popularity of the earlier book, and will be welcomed by astronomy enthusiasts of the southern hemisphere.

Astronomy is the oldest of all the sciences. It was more important in the life of man thousands of years ago than it is to the average person today. To ancient man, night-time was a frightening experience and he used to protect himself and allay his fears by staying close to an open fire. Imagine looking up at the starry skies thousands of years ago and trying to understand the universe. While the nature of the stars themselves was a mystery to those ancient observers, they realised that the rising of a particular group of stars, or constellation, heralded the onset of spring or winter, and bright stars were used for navigational purposes. Most of the objects were known to be fixed stars, their relative positions remaining the same year after year. Observers from various civilisations arbitrarily split the stars into groups, or 'constellations'. Some, like the Ancient Greeks, thought they resembled mythological figures, animals or other creatures: Orion the hunter, and his dogs Canis Major and Canis Minor, the captured prey Lepus the hare, and so on. There were also a few wandering stars, which the Greeks called planets. These seemed to be confined to a path in the sky we call 'the ecliptic', and the early astronomers divided the stars along the path of the planets into the zodiacal constellations. In time, astronomers learnt to predict the movement of these wandering stars. Together with the Sun and the Moon, they appeared to move around the Earth, which was considered to be at the centre of the universe. Occasionally, strange things would happen in the sky. A bright comet, which was generally believed to be a bad omen sent by an angry god, or a bright 'guest star' (supernova) might appear. When a partial solar eclipse occurred, the ancient Chinese believed that the Sun was being eaten by a dragon. Modern astronomy is built upon thousands of years of knowledge, but the biggest advances have been made since the invention of the telescope in the first part of the seventeenth century, and above all in the last 60 years since the employment of computers and the advent of space exploration. One hundred years ago we were not sure what a galaxy was; 70 years ago radio astronomy was just being discovered; and just a few years ago we had only a sparse knowledge of the outer planets. This book will allow you to discover for yourself some of the many types of objects that make up the universe. No previous knowledge of astronomy is required, but the reader will benefit from studying the book in some detail before going out to examine the sky. There is a small amount of mathematical notation such as powers of 10, and some astronomical abbreviations are used in the text, although these will be defined when they are first used. Should you encounter any unfamiliar terms, refer to the Glossary and Appendix 1 for explanations. Because of the rapid changes in technology, especially with digital cameras, today's advanced amateur astronomer can detect more objects than could the professional astronomer in the mid-twentieth century. Relatively low-cost computerised telescopes together with sophisticated software allow research to be conducted at a personal observatory. Astronomy is one of the few sciences where amateurs have made great contributions and will undoubtedly continue to do so in the future.

This is an excerpt from the book: Guide to Night Skies of Southern Africa, by Peter Mack.

This enlarged, new-format edition of Guide to Night Skies of Southern Africa has been thoroughly revised and updated to incorporate the latest findings and advances in the science of astronomy.