Frogs and Frogging in Southern Africa, by Vincent Carruthers 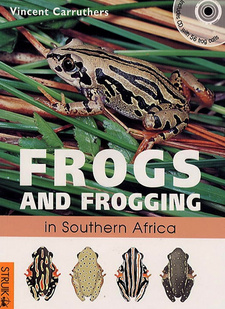 Animals are classified into a hierarchy of categories, each of which is based on skeletal or other features that indicate a common evolutionary ancestor. Phylum: The animal kingdom is divided into several phyla. Frogs belong to the phylum Chordata, which includes the vertebrates - animals with a backbone, hollow dorsal nerve cord, postanal tail, pharyngeal gill slits and a thyroid gland. Class: There are nine classes of vertebrates? mammals, birds, reptiles, amphibians and five classes of fish. Frogs are amphibians - a class of vertebrate animals with two phases to their lives: the tadpole and the four-legged adult (amphi = two, bios = life). Order: Amphibians are divided Into three orders. Frogs are tail-less amphibians and belong to the order Anura (a = absent, ura = tail). Anurans are found on all continents except Antarctica. The other two orders are the Caudata (cauda = tail), salamanders and newts, and the Gymnophonia (gymnos = naked; phonia = snake-like), burrowing amphibians from equatorial rain forests. Family: There are 49 families of frogs in the world, 12 of which occur in South Africa. Genus: There are about 270 genera worldwide and 31 in South Africa. Species: About 5 900 frog species occur worldwide and about 115 are found In South Africa. Subspecies: Sometimes a population of frogs is separated from others of its species by a barrier such as a mountain or desert. If these isolated frogs show consistent differences from the rest of the species, but could still breed with them if the barrier were removed, then they can be considered to be a subspecies. Note: Before the advent of scientific classification frogs and toads were thought to be two separate types of animal. However, toads are simply one of the 49 families of frogs, the family Bufonidae. Common names are usually easier to remember. However, common names for South African frogs have only recently been standardized and a variety of different names have been used in older publications. English and Afrikaans names in this book follow the standard nomenclature used in A Complete Guide to the Frogs of Southern Africa. Technical terms have been used as little as possible and terms that may be unfamiliar are explained in the glossary on page 101. [...]

This is an excerpt from the guide: Frogs and Frogging in Southern Africa, by Vincent Carruthers.