Frogs and Frogging in South Africa, by Vincent Carruthers and Louis du Preez 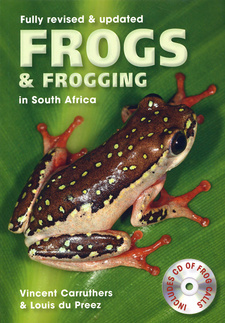 Frogs and Frogging in South Africa describes all 129 frog species that occur in the region and includes clear, colourful photographs, keys and maps to aid identification. Team authors Vincent Carruthers and Louis du Preez presented this revised and updated edition in 2011.

How frogs function, how best to find, identify and observe them and how to attract them to garden habitats.

Frogging is not just about frogs. It is about exploring wetlands, listening to the sounds of an African night, observing and conserving the natural world. Frogging can be science or it can be recreation. To some it means researching for a Ph.D., to others it means exciting discoveries on a summer holiday. Many may simply go frogging through the pages of this book. The book covers all 115 species currently recorded in South Africa. However, the number of recorded species is constantly changing as new ones are discovered. The pages that follow will introduce readers to these fascinating creatures and enable them to identify each species and understand how they have adapted their form and behaviour to suit a wide diversity of habitats. Common names for animals are only of value to speakers of the language concerned. To facilitate international communication and avoid confusion, scientific names comprise two Latinized words: the first indicates the genus to which the frog belongs and the second indicates the species. A third word can be added in the case of a subspecies. Scientific names are always italicized and only the first word (the genus) begins with a capital letter, for example Hyperolius marmoratus taeniatus. The names of families, orders and classes are written with an initial capital letter but not in italics. Common names are usually easier to remember. However, common names for South African frogs have only recently been standardized and a variety of different names have been used in older publications. English and Afrikaans names in this book follow the standard nomenclature used in A Complete Guide to the Frogs of Southern Africa. Technical terms have been used as little as possible and terms that may be unfamiliar are explained in the glossary on page 101. Frogs are more often heard than seen, and utter a number of calls - mating, territorial, release and distress calls. Of these, mating calls are most commonly heard, made by males to attract females to the breeding site. The mating call is unique to each species, and the hearing of the female is attuned so that she recognizes and responds preferentially to that call. Calling, and thus mating, is stimulated by different factors in different species. Rain is the most common stimulant and some species, Squeakers, for instance, immediately react to any Precipitation. Other species, such as Bullfrogs, wait'until their breeding sites are filled by heavy storm waters or several consecutive days of rain before they begin to breed. Increased temperature is another stimulant and many of the toads start calling with the warmer spring evenings. Because temperature increases usually precede the advent of rains in the summer-rainfall areas, toads are sometimes incorrectly credited with the ability to predict rain. Mating calls summon females from afar and some species form choruses to give the approaching females a larger and louder 'target area' to locate. (...)

This is an excerpt from the frog guide: Frogs and Frogging in South Africa, by Vincent Carruthers and Louis du Preez.