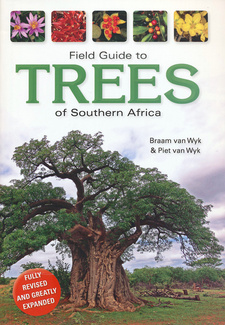 Bigger, better, and with many added features, this well-loved guide, Field Guide to Trees of Southern Africa, is more indispensable in the field than ever. This second edition has retained all the desirable features of the first, but Braam van Wyk and Piet van Wyk have made improvements and additions to make it even more useful.

For the purposes of this book, southern Africa is defined as the mainland region of the African continent south of the Kunene, Okavango and Zambezi rivers, a geopolitical region comprising Namibia, Botswana, Zimbabwe, South Africa, Swaziland, Lesotho and that part of Mozambique south of the Zambezi River. The distinction between shrubs and trees is somewhat artificial and often breaks down in practice. Here, we define a tree, broadly, as any perennial woody plant growing to a height of at least 2m. Although a typical tree has a single trunk, it may be multi-stemmed. Our definition also embraces robust, woodv climbers. An estimated 2100 tree species, subspecies and varieties are native to southern Africa, and well over 100 more, introduced from other parts of the world, are now naturalized in the region. Many of these aliens have become invader weeds, penetrating and replacing indigenous vegetation. Trees occur in a wide range of vegetation types, with many species found only in specific floristic regions and centres of endemism. Climatic conditions (rainfall, temperature, the incidence of fire) largely determine the nature of the various principal vegetation types, forest, grassland, savanna, desert, fynbos and so forth, which are so classified according to the general effect produced in a particular area by the growth form of some or all plant species in combination. Large areas that are relatively uniformly covered by any one of these broad vegetation types usually represent major biotic zones and arc often referred to as biomes. Biomes themselves can be divided into smaller, more homogeneous ecological units or vegetation types, based upon such criteria as the dominant plant species, plant density and height. Mopane woodland, thorn bushvcld and miombo woodland are examples of such vegetation types found in parts of southern Africa. These types often reflect more localized conditions -mean annual rainfall, for example, and the nature of the soil. A simplified vegetation map of southern Africa appears on page 7. Note, however, that the vegetation depicted is that which would have been prevalent today had the destruction wrought by human encroachment never taken place. At present very little (no more than 10 per cent) remains of some vegetation types, particularly within the Grassland and Fynbos biomes. As may be expected, vegetation types dominated by woody species are usually rich in tree diversity. In southern Africa, the greatest diversity of trees is found mainly within the Forest and Savanna (bushveld) biomes. The geographical distribution of individual plant species (which, taken together, comprise the flora of a region) rarely covers precisely the same range as the vegetation type(s). Climate, though the main determinant of vegetation type, is clearly not the only variable to be considered when trying to interpret present-day tree species distributions. A complex combination of many other factors, such as the evolutionary history of the species, continental drift, past climatic change, geology, soil characters, topography and interaction with other plants and animals (including human beings), must also be taken into account. When the distribution of native plants is mapped, certain recurring patterns emerge wirhin the great diversity. (...)

This is an excerpt from the guide: Field Guide to Trees of Southern Africa, by Braam van Wyk and Piet van Wyk.

A Photographic Guide to Trees of Southern Africa