Field Guide to the Wild Flowers of the Highveld, by Braam van Wyk and Sasa Malan 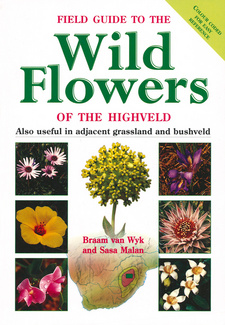 Braam van Wyk's and Sasa Malan's Field Guide to the Wild Flowers of the Highveld, the first photographically illustrated field guide to the rich flora of the south-central Transvaal, developed from Sasa Malan's hobby of photographing wild flowers in the Magaliesberg.

The idea to publish her collection of photographs was initially frustrated by the difficulty of finding a professional botanist to co-operate in the project, but it began to take shape when Braam van Wyk became involved in 1986. The layman who has no particular botanical training but likes to know something about nature around him is the intended target for this field guide. Identifying a plant is merely a means to an end, and by providing this means - in the form of a plant's scientific name - the guide opens up to the reader all published knowledge about it. We hope that professional botanists too, and in particular teachers of biology, will find this work of practical value, as we would like to see schools taking a more active role in teaching pupils the identities of plants during field work. Even at primary school level the natural inquisitiveness of the young child provides an ideal opportunity for this. With at least 2000 species of indigenous and naturalized alien flowering plants in the core field guide area, plant identification is not an easy task. Readers should, however, find comfort in the knowledge that even experts have difficulty in dealing with the remarkable diversity of the southern African flora. Its total of about 24000 species exceeds that of any other temperate flora in the world. Our selection of plants has been based partly on the frequency with which species have been recorded by plant collectors, and therefore encompasses a high proportion of those most likely to be seen. In addition, we have included a few of the less common species which would probably be encountered only by the more dedicated explorer of the veld. Grasses, long neglected in general plant identification guides, do however form a major component of the vegetation of the field guide area and therefore merit a separate section. Unlike those in many other field guides, the plants in this book are arranged not in the traditional order of their presumed evolutionary development, but are grouped firstly on the basis of floral colour and secondly according to families, in alphabetical order. We believe this approach will make it easier for the beginner to find an illustration of the plant to be identified. We have also stressed the concept of family recognition which, in our opinion, is a first step towards competence in plant identification. Formal identification keys have been avoided mainly because of our relatively incomplete coverage of the local flora, but also because the numerous, often somewhat obscure features would be of little value to the layman. Although we have tried to use terminology that is readily accessible to the layman, the inclusion of some specifically botanical terms has been unavoidable, and a glossary has been provided to assist those unfamiliar with them. Some technical terms have been used in a generalized sense, with reference to a rootstock, for example, including structures such as roots, stems, rhizomes and tubers. Knowledge of the names of plants inevitably leads to a greater awareness of the natural environment, and in the introduction to this book we have discussed the vegetation types and the flora of the field guide area, as well as aspects of plant classification. With a human population exceeding 5 million and still growing, the region covered by this field guide contains the greatest concentration of urban areas in southern Africa. Its natural vegetation has suffered severely from man's impact, and is constantly and inevitably being destroyed to provide for his material needs. (...)

This is an excerpt from the book: Field Guide to the Wild Flowers of the Highveld, by Braam van Wyk and Sasa Malan.

Wild Flowers of the Central Namib

From the series of Antje Burke, this is a special guide to wild flowers of the Central Namib.

Wild flowers of the Northern Namib

This is the third volume in the Wild Flowers series about the northern Namib Flora.