Field Guide to the Acacias of South Africa, by G. Nico Smit 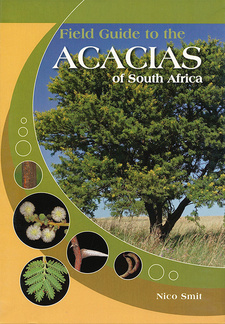 Professor Dr. G. Nico Smit's Field Guide to the Acacias of South Africa attempts to give an account of all 48 recognised species, subspecies and varieties of the genus Acacia that occur within the borders of South Africa.

These include four newly described species from South Africa, as well as four species which previously formed part of the A. karroo complex. One recognised hybrid is also included. Two pages are devoted to each form, which include high-quality colour photographs, a distribution map and a concise description. The main components of the information are discussed below.

The scientific name of a species is made up of two parts. The first part is the genus name (Acacia in this case) and in writing always starts with a capital letter. The second part is the species name (for example nilotica) which is always written in lower case. The name of subspecies or varieties (which are variants within a species) consists of the name of the species in which it is classified, followed by a word indicating its rank (subsp. or van) then the subspecific or varietal epithet.

Common names can be confusing since the same name may apply to two or more different species, or the same species may have more than one common name. With few exceptions the common names that are used in this book are given in accordance with Van Wyk, et al. (2008). Briza Publications, Pretoria. The most commonly used names are given first in bold with less frequently used names in brackets.

These have been proposed as a handy means of marking trees along highways and hiking trails, in nature reserves and recreation resorts, and also as a general quick-reference guide. The National Tree Number of each form is given in accordance with Von Breitenbach (1990) and Van Wyk (2008).

This is an excerpt from the book: Field Guide to the Acacias of South Africa, by G. Nico Smit.

Field Guide to the Acacias of South Africa

This field guide includes all 48 recognized and newly described species, subspecies and varieties of the genus Acacia of South Africa.

This guide is a practical easy-to-use guide for the identification of indigenous cycad species of the genus Encephalartos of South Africa.

Grasses of the Kruger National Park and surrounding Bushveld