Executive Outcomes: Against all Odds, by Eeben Barlow (2nd edition) 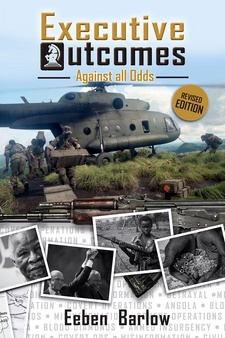 Images taken from the 2nd, revised edition of Eeben Barlow's book, Executive Outcomes: Against all Odds.

The following text is an outtake from the 8th chapter of Eeben Barlow's book, Executive Outcomes: Against all Odds, and describes the planning and the preparations for the Battle for Soyo and surrounds in Angola during 1993.

08: Battle for Soyo and Surrounds

By early March 1993 the men were all in Angola and had completed their marryingup drills. Instead of the 501 had initially planned for, I was forced to recruit 72 men because of the potential danger I anticipated once they got to Soyo. Fifty-six of the contingent were South African Border War veterans, including many from 32 Battalion, Special Forces, the Paras, Koevoet, and other elite units. A few conmen and one or two comic book heroes had also bluffed their way into the company. It had been easy for them to slip in as there had been no time to enforce a strict vetting procedure. Once suitably armed with AK-47 assault rifles and PKM machine guns, the men started training in earnest to augment their chances of survival. The media had put us between a rock and a hard place. If we chose to fight UNITA, we would be classified as mercenaries. If we chose not to fight, the men would probably be killed or captured. The choice was easy for me; the men's lives and my company's reputation depended on it. I contacted Buks Buys on the satellite phone and told him what problems the men could expect to encounter when they arrived at Soyo. I expected UNITA to be ready and waiting and I didn't want the men to be caught off guard. I decided they should prepare for war. If it came to that, I wanted them to be able to protect themselves. I also had increasingly grave reservations about the FAA's ability to capture and hold Soyo, and believed that the men might be faced with that task if the FAA failed. There would be no other way to honour our contract with Sonangol and Heritage Oil. "Buks, I want our men to assist the FAA as much as possible in taking Soyo. We have been forced into this situation and now we'll just have to live with the consequences. If anyone disagrees, tell them to pack their bags, we don't need them." Due to the media's ever-growing interest and inflammatory reporting on the company, Buks and some of the men conducted a joint planning session with the FAA commanders at Cabo Ledo. It was apparent that the FAA did not, as previously claimed, have current intelligence on the ground. What was known was that UNITA had established bases at the Campo Oito pumping station (located to the southwest of Soyo at a small facility known as Quefiquena) and at Sumba (approximately twenty kilometres to the east of Soyo). It appeared that UNITA expected any attempt to retake Soyo to come from the direction of Sumba. That was where the intelligence ended. A simple plan was devised: a joint helicopter assault and amphibious landing would retake Quefiquena, as this was considered to be the more lightly defended area. Executive Outcomes (EO) would conduct the heliborne assault to secure and hold the beachhead, and the FAA would carry out the amphibious landing with infantry and armour. The FAA accepted this plan and also agreed to ensure adequate air support by means of Mi-24 helicopter gunships and MiG-23 strike aircraft. If Quefiquena could be secured, it would give the FAA a firm base from which to expand their operations. It was assessed that UNITA considered an attack on Quefiquena highly unlikely (hence their apparently poor defence of the area). [...]

This is an excerpt from: Executive Outcomes: Against all Odds, by Eeben Barlow

Executive Outcomes: Against all Odds

This is the second, all revised edition of Eeben Barlow's war memoires, Executive Outcomes: Against all Odds, which has been published in 2018.