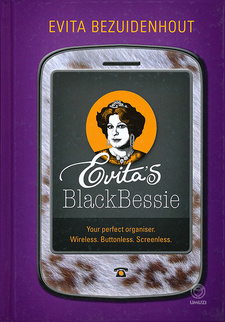 South Africa's Grand Dame, Evita Bezuidenhout, speaks to us about the pleasures of simplicity and - with Evita's BlackBessie - presents her answer to the domination of digital devices.

How many times have I not been with people who ask me what my plans are? I take out my notebook and flip to the third page and tell them. They stare at me in wonder. If I then take out a pen and add something to the page, they gasp with amazement. Or the times I have asked friends if we can meet next Thursday at 11:00? They take out their BlackBerry or whatever phone rules their lives, and then sometimes with their fingertips, or with a small sliver of plastic, dot i's and cross t's in a desperate attempt to find the information. I just stand with my notebook open on page 6 and all the info is there. They curse and use bad language as they press the wrong button or dot the wrong t. Eventually they say, "I'll send you an sms." I'm too polite to suggest that they just look it up in their diary. Does anyone still have a diary? Of course not; it's the 21st century and everything is digital. I love it! I celebrate the magic of Google (on which I have 23000 results!) I enjoy smsing and restructuring spelling to suit the twitter and tweet. YouTube makes me an addict and the Facebook of my grandchildren is a source of wonder. But I also love sitting quietly somewhere with my notebook and my pencil to organise my life without the fear of someone at Microsoft or Apple listening in or peering at me from the depths of my Nokia. I say "pencil" because it is always better to start with something you can rub out, rather than having to typex away the inked words. Oh dear, I think I have used words here that some people don't understand: pencil, typex, ink. And as for "rubbing out", I don't think I want to go there. I also love fiddling with my BlackBerry, checking e-mails in the Pick n Pay queue, or smsing my grandchildren on a whim. But when it comes to the alphabet of my life, call me old-fashioned: I keep lists and columns and have managed to run a full life for over seventy years without having to recharge a battery, or report a stolen expensive cellphone. That's why I have focused on this BlackBessie. It does many things that no technological miracle would be bothered with. It's more friendly, because it's about you and not about itself. It is something that you can keep and refer to over the years without fmding that your information has been lost. But more than anything, one day - and I'm not being hysterical or cynical - there will be that dreaded sun flare. All the precious heartbeats in our space satellites will be fried. The era of instant communication will be gone. So will your computer with everything on it. That means the bank can't tell you where your money is, or how much you have. Let's not make a list of the chaos. Let's just know that he or she who holds the pen in hand might end up the ruler of the world. I always say: don't fix what's not broken. For centuries we wrote things down and turned pages to explore. By using the blank pages of this notebook and making them your own, you are not looking back or being nostalgic about the days of silent films and good manners. You will just be organising and structuring your life without ruining your eyes on digital lettering, cracking your nails on small keyboards and using very bad language as you misspell essential passwords and get nowhere. [...]

This is an excerpt from the book: Evita's BlackBessie, by Evita Bezuidenhout.