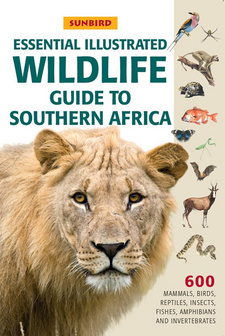 With the chapter The amazing wildlife of southern Africa, David Bristow introduces his essential illustrated guide to the reader. Also, we have put in an example, how animals are descripted in this guide.

The amazing wildlife of southern Africa: Nowhere else on earth is such an amazing abundance and variety of wildlife, large and small, to be so easily seen and appreciated. It's a land where huge tuskers and big cats rule the veld, but where the mass of even more fascinating animals underground (the termites) is greater than all of those above. Recognising and understanding the creatures that inhabit the wild places is a challenge few of us can honestly claim to master - although many people have chosen this as their profession, be it as scientists, field rangers in national parks or as guides in any one of the many private game reserves. For starters, there are some 900 different species of birds (10% of all the species in the world), 145 different kinds of snakes, 5 families of frogs and more than 80000 different types of insects. Few people could name more than 100 birds, maybe 20 snakes and a couple of frogs. While many of them are, admittedly, rare, many hundreds can readily be seen in reserves, parks, on the open veld or in forests. Indeed, any patch of ground, no matter how small, will be teeming with life. This book showcases and helps you to identify the most common, the most numerous and the creatures you are most likely to see and - hopefully - learn something more about them.

While many, like most insects, occur almost everywhere in the region, some are confined to a specific habitat (like fynbos or grassland), while others will occur in a very limited range. Perhaps the best example of this is the Brenton blue butterfly (see page 320), which is found in only one small location, little more than 2 ha in extent. We have, however, been able to include in this single volume all the types of wildlife that occur in our part of the world. And while you might be unlikely to see some of them, this guide is designed to be a single reference to the great abundance of creatures that live with us in the natural wonderland of southern Africa.

his is the third edition of this book, originally published in 1989. Since then much has been learned about both animal behaviour as well as animal distribution. Every species account in the book has been carefully researched and updated for this edition, all the maps have been revised and many of the illustrations redrawn. It is, therefore, totally up to date in every respect. New to this edition is an assessment of the status of each species: whether it is still common, rare or even endangered by the impact of the human footprint on the planet. As well as the English name for each species, we give also any alternative names, previous common or scientific names in the cases of name changes, the Afrikaans names as well as various African names where there is a known name for the particular species.

Here is a book that takes you into the realm of the wilds, introducing you to the various habitats, showing you what the many animals large and small, familiar and obscure, look like and how they behave - sometimes quite bizarrely it turns out. We trust you will enjoy this journey into the amazing world of southern African wildlife. (...)

A crusty and unpredictable customer, the black rhino is also unsociable; even adult males and females enjoy only a fleeting passionate relationship before going their separate ways. The most stable bond is between a female and her calf, which she suckles for about a year - and will reject, sometimes violently, when the next calf is born, usually when her current calf is 2-3 years old. The prehensile upper lip that gives this species its alternative name is used to grasp the twigs and shoots on which it browses. If these edible morsels are out of reach, the rhino simply bulldozes the shrub down.

Its two 'horns' are actually composed of tightly compressed hair-like fibres, and they are attached to the skin, not the skull. The well-developed rear horn is usually as long as, or longer than, the front horn. (The medicinal and supposed aphrodisiacal properties associated with these horns have led to many a rhino's wanton slaughter.) When a black rhino charges, it keeps its head up until the last minute, when the formidable battering ram of its front horn is lowered.

A loud shout may be enough to deflect the charge, but it is prudent to give this fearsome opponent a wide berth or run for cover if charged, as it will push home an attack with potentially fatal results. The black rhino once roamed extensively throughout the subregion, but now around 2000 - about 60 per cent of the world total - live in reserve areas. Altern.: hook-lipped rhino; Afrikanns: swartrenoster; Xhosa: umkhombe; Zulu: ubhejane; Tswana/Sotho: tshukudu e ntsho.

This is an extract from the book: Essential illustrated guide to Southern African Wildlife, by David Bristow.