Emily Hobhouse and the Reports on the Concentration Camps during the Boer War 1899-1902, by Birgit Susanne Seibold 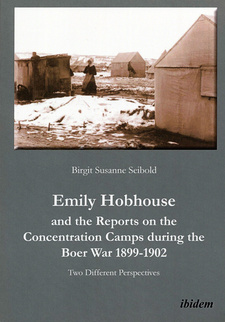 In her enlightening study on Emily Hobhouse, Dr. Birgit Susanne Seibold compares the Hobhouse Report on the concentration camps during the Boer War 1899-1902 to the official reports of Millicent Garret Fawcett.

On 26 January 1901 Emily Hobhouse reported from the camp at Bloemfontein. The camp was situated in a plain, 2 miles from ihe town of Bloemfontein. It was occupied by about 2,000 people, including 900 children. The camp consisted of tents, together with three corrugated iron hospitals and live rows of corrugated iron huts in which about 100 families were accommodated. During the day there was terrible heat and a plague of flies in the tents. In each tent there lived on average 6 persons, in some cases even up to 9 or 10, which meant that the lents were greatly overfilled. When it rained at night, the water streamed into the tents. There were only a few mattresses, so that most people had to sleep on the ground. Emily demanded straw and hay from the military, so that the camp's inhabitants could at least make their own mattresses. The hospitals had 16 beds each, together with 3 tents, and were always full. The daily food rations consisted of half a pound of meat, including bones and fat, two ounces of coffee, half a pound of coarse flour, 1 1/2 of a tin of condensed milk, and half an ounce of salt. Earlier, there had sometimes been potatoes, one per person. There was no soap. There were 50 cows in the camp, which for lack of fodder yielded only 4 buckets of milk, which were urgently needed for the many children in the camp. Up to Emily's arrival, the drinking water taken from the river had not been boiled, so that many people were sick of typhoid. On this Emily commented: "We have much typhoid, and are dreading an outbreak, so I am directing my energies to getting the water of the Modder River boiled. As well swallow typhoid germs whole as drink water - so say doctors." Not everybody was able to cook, let alone to boil the water, since there was not enough fuel for all. There were also no vessels in which to keep the water once boiled. Emily therefore proposed that at least one bucket or can should be distributed to each tent, and instructions be issued to boil all drinking water. She also proposed acquiring a railway train boiler to boil the water for everybody. As a result of her initiative, cooking stoves and water containers were provided. Because of the numerous cases of typhoid, an epidemic was feared. On 27th February, Emily wrote of Bloemfontein that they had already had 70 cases of typhoid, as well as a measles epidemic, pneumonia and tonsillitis, together with other diseases. On this, the hospital was expanded, in stages. There was only one nurse in the camp, who had worked there from its inception. As well as her normal duties, she had to train two Boer girls to help her in the future. Emily reported: "The nurse, underfed and overworked, just sinking on to her bed, hardly able to hold herself up, after coping with some thirty typhoid and other patients, with only the untrained help of two Boer girls - cooking as well as nursing lo do herself." Not only the nurse was undernourished: the children in the camp were particularly affected. Emily wrote in her report that it was the children that were hardest hit by the cruelty of the camp system: "I call this camp system a wholesale cruelty. It can never be wiped out of the memories of the people. It presses hardest on the children. They droop in the terrible heat, and with the insufficient, unsuitable food; whatever you do, whatever the authorities do, and they are, I believe, doing their best with very limited means, it is all only a miserable patch upon a great ill." [...]

This is an excerpt from the book: Emily Hobhouse and the Reports on the Concentration Camps during the Boer War 1899-1902, by Birgit Susanne Seibold.

Two different perspectives on Emily Hobhouse and the Reports on the Concentration Camps during the Boer War 1899-1902.

To Love One's Enemies. The work and life of Emily Hobhouse

Taken Captive by Birds is a collection of Marguerite Poland’s discovery of birds in young years and the role they have played in her life.