Discover the Colourful World of Owambo, by Willie Olivier 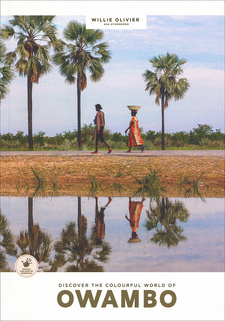 As the name of this book, Discover the Colourful World of Owambo, by Willie Olivier, suggests, Owambo, the land of the Aawambo, is a tapestry of vibrant colours and textures.

Despite its rich history and fascinating culture it sadly remains one of the least-visited areas of Namibia. My introduction to Owambo dates back to the mid-1980s when I worked as a reporter for the South West African Broadcasting Corporation and five years after independence for the Namibian Broadcasting Corporation. During these and numerous subsequent visits I became fascinated by the history of the Aawambo, their culture, the landscape and the many historical and cultural sites along the byways. I was also struck by the friendliness and welcoming nature of the people. In my search for more information, I found that although there were several excellent scholarly and academic works on various aspects of Owambo and the Aawambo, there was a near-absence of easily available information. This inspired me to begin writing this book eight years ago - despite not being an expert on Owambo. I was also blissfully unaware of how daunting a task it would become as the manuscript continued to become more voluminous as time went by. During my research, I used the most authoritative sources, realising that history is by its very nature a contentious discipline and that the accounts and perspectives of authors are, inevitably, open to contestation. I have, therefore, presented all sides of contentious issues without making any value judgements. Although I have tried to provide coverage as comprehensively as possible, Discover the Colourful World of Owambo is by no means the final product, but merely a draft which can be improved upon in future editions. I trust that you will gain a new insight into this fascinating part of Namibia and a new understanding of the Aawambo, their history, culture and way of life. All you need is a sense of adventure and a little bit of patience to discover the land of the Aawambo.

The complex network of seasonally inundated watercourses, known as iishana (singular oshana), is a prominent feature of central and western Owambo. Major seasonal floods, locally known as efundja, are a lifeline to the people of Owambo. They provide water for domestic use, recharge groundwater and replenish nutrients. Grasses in the iishana are regenerated, providing grazing for livestock, while the reeds and sedges are used as building material. The floods also bring a bounty offish migrating southwards. Heavy local rain and runoff from further upstream may cause localised flooding and the iishana may hold water for weeks or up to four months. Efundja occur when above-average rains fall in the southern Angolan highlands, inundating vast areas as the water slowly spills into depressions and pans. Major efundja occurred 11 times in the 73 years between 1941 and 2013 (including 13 years for which no data is available). Four of these occurred between 2004 and 2011, while medium flows occurred 18 times. The arrival, extent and duration of the efundja is unpredictable as it depends entirely on when, where and how much it rains in the catchment areas of the Mui and Cuvelai rivers. Rising about 260 kilometres north of the Namibia-Angola border, the floodwaters of these rivers may arrive as early as January or it could be as late as April. The Mui and Cuvelai rivers are perennial for about 200 kilometres until they spill onto a vast plain. [...]

This is an excerpt from Discover the Colourful World of Owambo, by Willie Olivier.

Discover the Colourful World of Owambo

Discover the Colourful World of Owambo is a comprehensive guide to the North of Namibia.

500 hiking trails of South Africa are described in this new volume and it offers something for everyone, from the casual ambler to the experienced hiker.

Touring in South Africa is a most interesting and colourful collection of circular and linear motoring tours.

The best of Namibia. Travel guide

Good and compact Namibia travel guide to the best sites of Namibia.