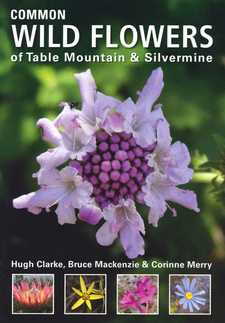 This easy-to-use guide is an expanded and updated edition of Common Wild Flowers of Table Mountain by Hugh Clarke; Bruce Mackenzie and Corinne Merry. 60 flower photographs and descriptions have been added and the book now also covers the Silvermine reserve.

Table Mountain has some 1500 plant species and Silvermine over 1000 species. You may wonder: How does anyone know which flowers are most commonly found on the mountain? Bruce Mackenzie, one of the authors, spent seven years between 2006 and 2012 hiking all over Table Mountain making approximately 85 000 observations as to which species were flowering, where and when. When we compared his top 'most seen' 300 flowers with those of Silvermine, 87 per cent of those flowers were also seen in Silvermine. This is not surprising seeing that the two areas are adjacent. Corinne Merry, one of the key drivers of the FOSNA (Friends of Silvermine Nature Area) Flora Documentation Programme, has hiked in Silvermine for around 30 years and knows the area and its flowers exceptionally well. Based upon their data and knowledge, a selection was made as to which additional flowers to add to those already found in Common Wild Flowers of Table Mountain. To make the book even more interesting, we included a few 'specials' - beautiful flowers that are not all that common but are a huge delight when you discover them. Table Mountain and Silvermine lie on Cape Town's doorstep. Nowhere else in the world does an area of such awesome beauty and rich biodiversity exist entirely within a city of 3.75 million people. Table Mountain is not only a World Heritage Site but, by global poll, was voted one of the world's new seven wonders of nature. It occupies an area of 57 km2, with 650 km of hiking trails. Nearly one million people take the cable car each year to reach the top. The more adventurous hike to the summit or along the many hiking routes. Adjacent to Table Mountain in the south is Silvermine, a protected conservation area. Although smaller in area than Table Mountain, its fynbos vegetation is rich in species. These include a surprisingly large number of endemics - species found nowhere else in the world - like the showy Erica uma-viridis, which only grows on the higher lying areas of Silvermine East around Muizenberg Peak, or Erica neviilei growing on Noordhoek Peak in Silvermine West. Other attractions include some indigenous forests, caves and spectacular sea views over False Bay in the east and over Chapman's Peak Drive and Hout Bay in the west. For flower-lovers, a walk in these wild areas is an amazing experience year round, but especially during the spring and summer months (September to March). We have included flowers that are generally attractive, eye-catching and easily seen. Flowers that are really tiny and less interesting, which the average hiker or rambler would usually walk past without a second glance, are not featured. A few really beautiful species, although not widely dispersed, are included. The text is written for absolute beginners and has been designed to make flower recognition and identification as easy as possible. Where they are known, English and Afrikaans common names for flowers have been given, and scientific names are provided too. The flower descriptions have been kept simple - we avoided complex terms that mean little to those who have not studied botany. Words that appear in bold in the text are explained in either the text glossary or illustrated glossary. A special effort has been made to catch the essence of the flower being described, and to record features that beginners would most likely note and that will help identify each flower.

This is an excerpt from the book: Common Wild Flowers of Table Mountain & Silvermine, by Hugh Clarke et al.

Describes a variety of walking routes in the Table Mountain and features some 200 common wild flowers that can be seen along the way.

Wild Flowers of Southeast Botswana features 332 of the most common wild flower species occurring in the region.