Cheeses of South Africa, by Kobus Mulder and Russel Wasserfall 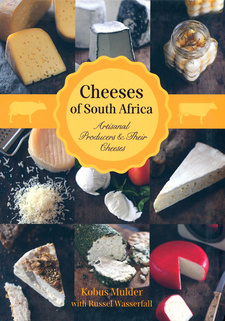 In Cheeses of South Africa, Kobus Mulder profiles 24 of these cheeseries, including popular award-winners such as Dalewood and Klein River. Russel Wasserfall contributed the food photographs.

(...) In recent years, South Africa has seen something of a revolution in cheesemaking. In the past, consumers had a limited range of cheeses to choose from, but the rise of artisanal cheesemaking has changed this picture. Thanks to pioneers like Wendy Harris, of Indezi River, and Chrissie Briscoe, of Chrissie's Country Cheese, there is a greater variety of cheeses available in retail stores and supermarkets, and an increased willingness on the part of cheesemakers to experiment with new tastes and styles. Consumers have also become more knowledgeable and more discerning about what they buy. Since 1995, South Africa's per capita cheese consumption has increased from 1.0 kg to 1.9 kg, according to Agri-Expo, a dairy industry body. Moreover, consumers have embraced more unusual styles and flavours. In turn, local cheesemakers have developed new products, such as Dalewood's award-winning Huguenot, that reflect local conditions and tastes and also honour the great cheesemaking traditions of the world. One of the key factors in this process has been the South African National Cheese Festival. The first edition of this event was held in April 2002 at Bien Donne farm outside Franschhoek. The numbers of exhibitors and enthusiastic visitors grew by the year, and in 2011 the festival moved to Sandringham Farm, outside Paarl. Agri-Expo also runs the South African Dairy Championships, the country's only competitive dairy awards. The industry's symbol of excellence is the Qualité Award, which has been awarded to qualifying dairy products since 2001. Products bearing the coveted Qualité logo represent the best in local cheesemaking. The title of Dairy Product of the Year is the very pinnacle of honour for a South African dairy product, and is bestowed on the best of the Qualité Award winners. South African cheeses have also earned acclaim at the annual World Cheese Awards, held in Birmingham under the umbrella of the BBC Good Food Show. In 2011 Kobus Mulder Mr Cheese was himself honoured by the World Cheese Awards for his Exceptional Contribution to Cheese. This section covers the basics of cheesemaking, the different types of milk and their characteristics and the advantages of raw versus pasteurised milk, and offers practical advice on planning a cheeseboard and how to pair cheese and wine. The bulk of the book focuses on the stories of individual cheesemakers and how they have developed their cheeses. Each chapter includes Cheese Notes by Kobus Mulder, offering a personal view of the achievements of the cheesemakers and their products. This is not a definitive encyclopaedia of artisanal cheese in South Africa. The cheese scene is constantly changing as new producers appear and interest grows in local artisanal foods. Rather, the book is a snapshot of some of the innovators and visionaries who have done so much to change the nature of cheesemaking in South Africa. Seek out their products, but look around and be willing to try the many new cheeses that you see.

This is an excerpt from the chesse guide: Cheeses of South Africa, by Kobus Mulder.

Finding the perfect wine to complement a carefully prepared dish is often a hit and miss affair, but The Food & Wine Pairing Guide aims to change that.

Franschhoek Food showcases the attractions of one of the country's most important wine-growing regions and a mecca for gourmets.

Picturesque Winelands takes the reader on a visual journey through a charming stretch of South Africa's landscape.