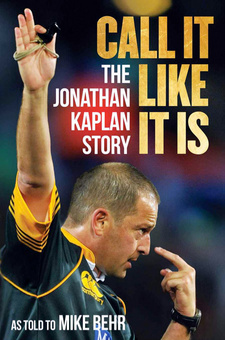 In Call It Like It Is, Jonathan Kaplan and Mike Behr describe exactly what it takes to be an international rugby referee. Find out about the whole story behind the sport sceens.

My first dealings with Jonathan Kaplan were when he was a senior at King David Linksfield, a large Jewish school in the heart or Johannesburg. He was a small but keen rugby player coming through the junior ranks playing mostly scrumhalf, if I remember correctly. Despite being a quick and intelligent player, Jonathan was never going to be big enough to make it as a professional. But wanting to stay involved with the game, it wasn't surprising to see him take up refereeing at a young age. I can remember Jonathan blowing First-XV games with boys just a year or two younger than him, and it was clear even then that he would go places. He commanded respect, and he was accurate and fair. I like to think these are qualities that have carried Jonathan throughout his career. Jonathan is the ultimate professional and always has been. I was amazed to see the meticulous records he's kept of each game he's blown, from schoolboy days to Test-match rugby and everything in between. Intricately constructed databases and spreadsheets have allowed Jonathan to track the rhythm and patterns of his refereeing career, and I have no doubt this attention to detail has made him the standout officiator he was till he retired. It's clear to me that refereeing is not just a job for Jonathan. It's his passion, it's what he gets up in the morning to do and it is what has made him one of South Africa's most respected whistleblowers over the last 20 years. Generally speaking, referees are a funny lot. Sometimes they will high-five you in the tunnel pre-match or invite you for a beer after the game only to blow you off the park for the opening 40 minutes. Quite often you're left thinking, "I thought we were mates?" as the half-time hooter sounds. Refreshingly, I've never found Jonathan to be like that; I've never received any preferential treatment and rarely, if ever, argued with his calls. In the early days it was nothing to see Jonathan blow a Test match with some of the world's biggest and best players on a Friday night at Ellis Park only for him to turn around on the Saturday morning and officiate a First-XV match in Joburg suburbia. I think that diverse apprenticeship, which reached great heights but never denied its roots, has contributed to the respect players have for Jonathan around the world today. While I'd long been an admirer of his, it wasn't until the New Zealand versus Wallabies Bledisloe and Tri-Nations decider in 2000 that I concluded he was set to become one of the all-time greats. In front of a packed-out Wellington stadium, Jonathan remained focused and made the correct call to award the Wallabies a penalty after the bell. Histoty tells tis John Rales calmly slotted the three points to hand Australia a historic win away from home. It was brave, it was poised and I'm sure Jonathan would tell you, it was downright frightening. Sometimes the scariest thing about an All Black match isn't the 15 men on the pitch but the 30 000 sitting behind the fence making it clear that they don't think much of you. In my opinion, it was at that moment Jonathan came of age as an international referee. Worldwide only a handful of referees would have had the guts to make that call, and I was incredibly proud to watch a young, up-and-coniing South African perform so professionally under pressure. (...)

This is an excerpt from the book: Mandela: In Celebration of a Great Life, by Charlene Smith.

Call It Like It Is. The Jonathan Kaplan Story

Call it like it is: the memoires of top rugby referee and South African Jonathan Kaplan.