Best Walks of the Drakensberg, by David Bristow 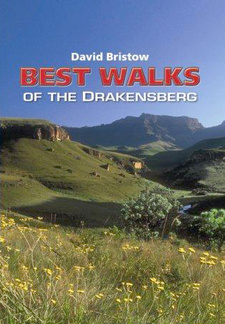 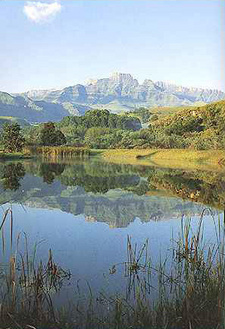 Introcuction by David Bristow: Since I produced the first version of this book, Drakensberg Walks, in 1988, much has changed there. True, much has remained the same: the wild, windswept summit ridges and vales, the secret Little Berg gorges, streams and forests, although the Escarpment itself is retreating at a rate of about one centimetre every decade. The Bushman paintings that are such a quintessential part of the Berg have changed little (although in some cases not little enough) in the intervening decade and a half. Also little changed is the lifestyle of the hardy Basotho herders who brave fearful summer storms and freezing winter blizzards as they tend their flocks of sheep, herds of cattle and semi-wild horses. Surprising indeed in our fast-changing world. And the significance of this for the survival of another 'tribe' of hardy 'mountaineers' is perhaps imperceptible to the casual hiker here, but cannot be overstated. In Barrier of Spears Reg Pearse recounts the episode of capturing in 1961 the first photo-graphs in Africa of the lammergeier. (By then it had been captured on film only twice before, in the Himalayas in 1942 and Spain in 1959.) It's a wonderful story, which I will not recount other than to say that, but for one brief sighting, no-one knew if any still survived. It took three years and careful detective work to locate a nest in the Mokhotlong region. In the 1970s it was estimated there were some 200 breeding pairs remaining in southern Africa (Lesotho). In 1987 I saw the lammergeier just three times during a three-month stay in the Berg. Then two feeding stations were started, one in Giant's Castle and another at Witzieshoek, and I'm convinced this has made all the difference. During the high traverse which I undertook in autumn 2002,1 saw them virtually every day for two months. The bearded vulture (Oypaetus barbatus), or lammergeier (from the German words for lamb and vulture), is neither a vulture nor a lamb catcher. It's an evolutionary cross between the eagles and vultures, a most majestic creature that is perhaps the definitive mountain dweller (for it is a supremely adapted high-altitude creature), but it has been heavily persecuted. Gypaetus loves bone marrow: it is such a specialist feeder that without bones it cannot survive. And for this it needs carcasses left long enough for only the bones to remain. These conditions are found only where traditional pastoralists remain in mountain areas, and the only place in southern Africa where these occur is Lesotho. In pre-industrial times the lammergeier was found from the Cape Peninsula, up the mountains of East Africa to Ethiopia and Morocco, then from Spain, right across Europe to the Himalayas and the higher ranges of China. Today it is found only in beleaguered colonies scattered along its former range. A major change in the area is that, where before it was a patchwork of private land, wilderness areas, forestry reserves, and nature and game reserves, today nearly the entire KwaZulu-Natal Drakensberg is contained within the uKhahlamba-Drakensberg Park and all controlled by the provincial parks board (Ezemvelo KwaZulu-Natal Wildlife, which I think we can get away with calling EKZNW). [...]

This is an extract from the book: Best Walks of the Drakensberg, by David Bristow.