At risk: Writing on and over the edge of South Africa, by Liz McGregor, Sarah Nuttall and others. 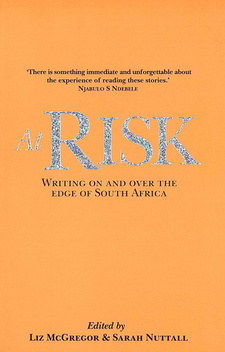 At risk: Writing on and over the edge of South Africa, by Liz McGregor, Sarah Nuttall and others.

In their book At risk: Writing on and over the edge of South Africa, Liz McGregor, Sarah Nuttall and other authors tell us that living at risk is now part of everyday South African life. Violent crime and AIDS pose threats in huge numbers. Shifts in race and class jolt one's sense of identity.

Ethically, we are challenged daily by rampant need in the face of plenty. In fact, our society as a whole feels as if it is a giant experiment that could very well go wrong. But it could also succeed. In each of these twelve narratives, something, or someone, is at risk. The stories we tell each other, about ourselves, are part of what makes us who we collectively are. Our social being in the world is made up of narrative layers: some subterranean, some surfacing. Not all of them make it into the open. Some layers remain local, others form national narratives, and others travel abroad. The kinds of stories that dominated the late apartheid period were tales of exile, struggle, community, resistance - fundamentally political narratives. The individual, in most of these stories, was either a hero or a traitor. Despite their complexity and range, these narratives depicted a world divided into good and evil. The aftermath of apartheid brought an explosion of stories of trauma, within a broader horizon of hope. This, in many respects, was what the Truth and Reconciliation Commission was about. Here, the storyteller was a witness, and the timescape dealt with was the immediate past. So, too, in the aftermath of the TRC, came the confessional - the work of expiation, the perspectives of victims and perpetrators. What we see now, just beginning to cusp, is a second wave. This wave is formed from a groundswell of personal stories written in a range of registers across a distinctive set of social issues (AIDS, crime, new forms of migration and mobility, consumerism). Writers of the now draw on registers of the unexpected - surprise, shock, bewilderment - and these registers come to characterise a new narrative age. In some respects they draw into the open the idea that freedom is not what they thought it would be; that it has brought unanticipated challenges. Writers write with a degree of astonishment -and especially with an alertness to a sense of risk. They take risks that they didn't or couldn't before - writerly risks, personal risks, professional risks. What we see too, in this second wave, are emerging registers of uncertainty, scepticism and doubt. These cohabit with an ongoing commitment by writers to the place in which they live - South Africa. The surfacing of scepticism and doubt emerges after a cultural moment of wonder at what was often referred to as a 'miracle' of political transition without bloodshed. We are living free, but with doubt - but also generally without demoralisation, writers seem to suggest. The second wave is not entirely distinct from what has gone before. One wave carries the undertow of that which precedes it. But this surge of narrative energy is new, of the now, and it speaks in a voice not heard in South Africa before. The nonfiction stories gathered here are written in the spirit of the second wave. They are written by academics and journalists but they collapse the distance that academic writing and journalism often impose. (...)

This is an extract from the book: At risk: Writing on and over the edge of South Africa, by Liz McGregor, Sarah Nuttall and others.

At risk: Writing on and over the edge of South Africa

There is something immediate and unforgettable about the experience of reading these stories of At risk - writing on and over the edge of South Africa.

Touch, Pause, Engage! takes the reader on a journey to the heart of South African rugby.

Load-shedding. Writing on and over the edge of South Africa

Load-shedding: Writing on and over the edge of South Africa is a collection of non-fiction stories from South Africa’s pre-eminent authors, journalists and commentators.