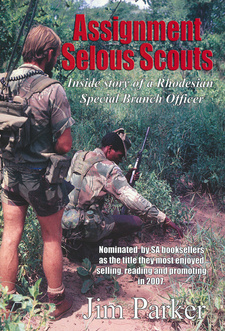 Jim Parker, the author, was a reservist British South Africa Police Special Branch NCO assigned to the Selous Scouts Regiment during the latter years of the Rhodesian Bush War. Assignment Selous Scouts is an eminently readable book and adds much to the understanding of that conflict.

[...] The insurgents ordered the families to lock themselves in their huts and remain there until the next day. Shortly afterwards more shooting was heard. The next morning they found the bodies of the two men riddled with 59 bullet wounds and mutilated almost beyond recognition. Inspector Arnold Woolley of Zaka police investigated the murders. Forensic examination of expended cartridges linked the cases to the murders of Sergeant Abias and Corporal Masara as well as Chief Bota who had been murdered four days earlier. The Grey Scouts was a specialist mounted unit and not a Special Forces unit. Its personnel were drawn from Territorials of The Rhodesia Regiment battalions with the addition of a small element of equine-minded regulars. Their horses were battle-trained and taught not to flinch during gunfire. They were also taught to scramble up a short, steep, ribbed wooden ramp into the backs of the unit's 11-ton transporters. When deployed the horses jumped boldly from the rear of the trucks without heed of the ramps. Their comrades in other units fondly called them the 'donkey wallopers'. Horses are more observant in the wild than men and pick up movement and scents long before their riders do. An experienced rider gets to know his mount's mannerisms and if it stiffens up from u sense of fear he can feel it through his legs. Although a mounted Grey Scout enjoyed the advantage of being swift and manoeuvrable in a contact, the disadvantage lay in being perched close to two metres from the ground. It was not necessarily good shooting on the part of guerrillas they had to be wary of it was their tendency to shoot high. While this suited foot soldiers, it could trove disastrous for mounted men. With increasing evidence of the subversion of tribes people in the Nyajena TTL by ZANLA, the JOC at Chiredzi decided to deploy the Greys into the area, it was thought that this would assist with quick follow-ups after guerrillas committed acts of terrorism. Until then the enemy, under their tough and battle-hardened sectorial commander, Nylon Ndela had been acting with impunity. At 15:10 on 18 March a Grey Scouts troop under Colour Sergeant Kenny was ambushed by Nylon Ndela's guerrillas and Trooper Johnson was wounded. Sergeant Kenny managed to rescue Johnson Shut his wounds proved fatal. Having failed to make an impact on the situation in the Nyajena, the Grey Scouts were withdrawn. ZANLA's high command in Mozambique deployed a specialist group of 30 guerrillas trained in the use of heavy weapons and demolitions. They infiltrated through Sector Two into the Gonare-Zhou National Park and cached their heavy weaponry near Chingele, one of the few high features in the north-cast region and close to the Matibi II TTL's border. The armaments included a 75mm recoilless gun, an 82mm mortar and a 12.7mm heavy machine gun as well as explosives. Special Branch's intelligence suggested the group had been trained in Romania and that it possibly included elements of FPLM (FRELIMO's army) in ZANLA kit. Its task was to attack military bases, protected villages and economic targets like vital road bridges. Their heavy weapons were easily broken down and transported by porters. The commander had been ordered not to venture too deep inside the Matibi II or the Sangwe TTLs. They should remain close to the game reserve so their weapons could be cached safely, away from the prying eyes of possible informers. They initially reconnoitred the area to decide on targets and plan attacks. Heavy weapons were unearthed for specific tasks and re-cached afterwards. During the evening of 27 March they moved into a position on the southern buttress of the newly constructed single lane high level bridge spanning the Lundi River at Chipinda Pools. A guard post manned by coloured and Asian soldiers of the Rhodesia Defence Regiment, (RDR) was positioned it the opposite buttress. [...]

This is an excerpt from the war memories: Assignment Selous Scouts, by Jim Parker.