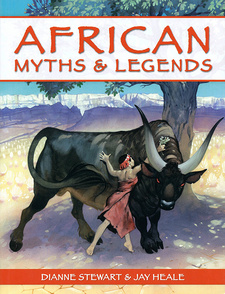 African myths & legends is a collection of paranormal incidents, traditional african and settler fairy tales, and animal fables, that have been arranged by Dianne Stewart and Jay Heale and beautifully illustrated by Gina Daniel and late Angus McBride.

The baboons looked down from their rocks and chattered nervously. Humans were returning to the lonely valley which the baboons hoped had been deserted forever. Stephen Coodrlck rode his horse with pride. Behind him, on horses and in trundling wooden wagons, were his wife, his children, servants and belongings. Ahead of him, sheltered in the folds of the Kouga Mountains, was the farm he had bought only a month before, in September 1860. He rode back to the first wagon where his wife sat beside the driver. 'See,' he told her with a dramatic wave of his arm. 'Prlnsloo's Kloof is ahead of us now. There Is the farm with Its stone house and kraal. On the slope behind is where we shall plant our orchard. Isn't it a picture? And I bought it so cheap. A real bargain! Van der Meulen seemed in such a hurry to leave that he threw in the cattle and goats with the price of the farm. He's a kind man.' His wife remained tight-lipped, and said absolutely nothing. In her own experience, a bargain price often hid something else. The Goodrick family was welcomed to Prinsloo's Kloof by an old farm worker named Cupido. Brown and wrinkled, he could have been one of the Khoi who had lived there for hundreds of years. He helped them move furniture into the sturdy farmhouse, and tended to the tired horses in the stables beside the stone-walled kraal. Stephen hugged his wife for joy before they fell into an exhausted sleep. They were woken by something like a scream from the dark. Stephen looked out of the window. His horses were neighing with fright. Taking his gun, he went outside. But the farm seemed empty of any intruders under the cold midnight moon. Next day the sun shone and Stephen was too busy on the farm to worry. His wife liked her new home and their children happily explored the streams and slopes of Prinsloo's Kloof. The family celebrated Christmas with delight. The new year of 1861 was greeted as the beginning of their new farm life. Then came a hot summer night when the horses were frightened once more. Exactly the same thing happened the following night, and the next. Each time Stephen swore he had heard a scream, and the horses went mad with fear, sweating and stamping. He questioned Cupido, and the old man shook his head but would not look him in the eye. The next evening Stephen sat out on his stoep with his dog beside him and his gun in his hand. He sent his wife and his children to bed and watched the stars light up the valley that was his. Perhaps he had been dozing when his dog pushed a nervous snout against his hand. Stephen looked up and saw a figure with a wide-brimmed hat slip into the shadows by the kraal. The horses neighed with terror and galloped wildly into a corner of the kraal. Stephen ran towards them, saw the figure again and fired both barrels at point-blank range. The intruder turned towards him, apparently unharmed. [...]

This is an excerpt from the book: African myths & legends, by Dianne Stewart and Jay Heale.

Folktales from Africa consits of 20 stories from the length and breadth of the African continent.

'South Africa’s Greatest Batsmen' provides insights about each man’s background and career, his batting technique, and his main achievements at the crease.