A Rumour of Spring. South Africa after 20 Years of Democracy, by Max du Preez 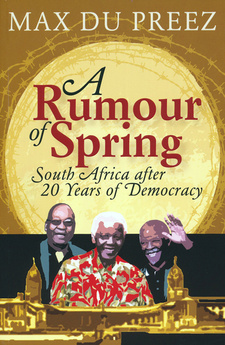 In his brand new critical book, A Rumour of Spring, South African senior journalist Max du Preez investigates and analyses the progress and lack of progress the country has made during these twenty years of Democracy.

Introduction: A Rumour of Spring. South Africa after 20 Years of Democracy

Spring? What spring? The title of this book, A Rumour of Spring, emerged from my own (rather schizophrenic?) analysis that I regularly dish out as a columnist and political commentator. I am always conscious of the need for hope, and of the tendency among so many South Africans to focus on the negative. So I try, sometimes almost against my own better judgement, to be upbeat, to see the good in government and society, and to record and acknowledge our achievements. After the African National Congress (ANC) elective conference in Mangaung in December 2012, I told my readers and listeners that we had witnessed something of a turning point. Compared to the ANC's previous conference at Polokwane a year earlier, Mangaung reflected a more disciplined and focused ANC. The sensible and ambitious National Development Plan (NDP) was formally accepted without much resistance as the blueprint for development towards 2030; the impressive Cyril Ramaphosa was elected as deputy president; strong statements were made that corruption would henceforth be tackled with vigour; a nail was finally driven into the coffin of the nationalisation debate; and the rowdy, reckless ANC Youth League was effectively put in its place. I confronted my audiences, especially those where most members were white: You guys looked at Julius Malema, former leader of the Youth League, and thought to yourselves, 'Well, that's the real face of the ANC. When he insults and threatens and foams at the mouth, you think he represents who black South Africans really are. En kyk hoe lyk hy nou (And look at him now): marginalised, humiliated, on trial for corruption and racketeering. Perhaps, I said many times, we've seen the worst of the ANC in the period between Polokwane and Mangaung. Perhaps the pendulum is now swinging back. Perhaps we can start taking the rumours of a new spring of hope and growth seriously. Over the past few years, a lot of commentators here and abroad had warned that South Africa was facing its own Arab Spring, referring to the revolutionary protests and uprisings in the Arab world that toppled the governments of Tunisia, Egypt, Libya and Yemen and plunged Syria into a devastating civil war. This prophecy of doom got more traction after the Marikana mining massacre in August 2012 and the violent strikes on farms around De Dooms almost at the same time. No, I said, this is an inappropriate comparison. The citizens of these Arab countries lived in dictatorships and had very little freedom of speech and association. South Africans live in a legitimate democracy with all the freedoms they need. If enough of them are unhappy with their government, they can vote them out at the next general election. The one thing we have really done right since 1994 is to hold credible elections that have not been questioned by anyone. We had our Arab Spring in the 1980s, I said. The United Democratic Front (UDF) mobilised the majority of citizens very effectively against the apartheid government. Mass protests, marches, strikes and 'rolling mass action' by trade unions almost paralysed the country. Thousands of people were in detention without trial under state-of-emergency regulations, and apartheid dirty tricks and death squads like the police's Vlakplaas unit and the army's Civil Cooperation Bureau and Directorate Covert Collection were rampant. But South Africa's political leadership eventually rose to the occasion and started a process of negotiation that defused the conflict and brought us a democracy, thus avoiding the fate that has befallen Syria and Egypt, I told audiences. Um, sorry, I was wrong. (...)

This is an extract from the book: A Rumour of Spring. South Africa after 20 Years of Democracy, by Max du Preez.

Carte Blanche 25 Years. The Stories Behind the Stories

Carte Blanche burst onto the scene 25 years ago as a genre never before seen on South African television and tells the stories behind the stories.