When the Russian Fleet visited Lüderitz and Dar-es-salam, Part 2, by Dr. Hans Schmiedel (1975) 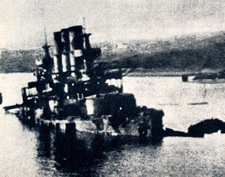 One of the Russian war ships sunk at Port Arthur. With acknowledgments to No. 18 International History Magazine "Tsushima". When the Russian Fleet visited Lüderitz and Dar-es-salam, Part 2, by Dr. Hans Schmiedel (1975)

(continued ...) I, myself requested information from the State Archives in Windhoek and also made enquiries from-acquaintances in Lüderitz. Both attempts were unsuccessful. I must therefore rely on the excellent book by the Baltic German author Frank Thiess, called Tshushima. (It was there that the Russian East-Asian fleet was completely destroyed by the Japanese Admiral Togo in May 1905). Thiess calls his book a Novel of a Sea Battle(Roman eines Seekrieges) but he did extensive research into this war and studied the exceptionally good book by the German Admiral von Maltzahn, called A sea battle between the Russians and Japanese(Der Seekrieg zwischen Russland und Japan) 3 volumes: Berlin 1912-1914. Thiess conveys with the word "novel" only the romantic adventurous journey of the tragic hero of the Russian fleet, Admiral Rozhdestuensky, travelling from Russia to the Far East, via Southern Africa. The German newspapers made no mention of the stay of the fleet at Lüderitz and Dar-es-Salaam, except for the fact of their arrival.

Only German colonial newspaper gave more detailed information about the sojourn of 2 Russian torpedo boats at Dar-es-Salam. Thiess, however, gives a vivid and dramatic account of the 5 days during which the fleet took on coal at Lüderitz. This report could only have come from one of the Baltic officers on board the Russian ships, to whom Thiess dedicates his book Tshushima. The Russian East-Asian fleet, officially known as the 2nd Pacific Squadron, should have reached Port Arthur on the Chinese coast during the autumn of 1904. At the time Port Arthur was heavily besieged by the Japanese and the already badly damaged 1st Pacific Squadron was anchored there.

Admiral Rozhdestvensky had had infinite difficulty in preparing his squadron for the voyage. It consisted of new but untested, and very old, almost useless, slow vessels. In the open sea near the Dogger Bank, between Germany and England, the Russian fleet, already nervous because of rumours that Japanese torpedo boats planned a nocturnal assault in that vicinity, fired upon an English fishing fleet sinking some of the boats. England, enraged at this act of piracy, threatened war for a few days. However, she was satisfied to leave the matter to be settled in an enquiry. The Russians subsequently paid a substantial amount in compensation to the relatives of the dead and for the boats destroyed.

After this episode Rozhdestvensky was considered a type of "Flying Dutchman" who would suddenly appear like a ghost out of nowhere and wreak havoc at any time. The entire English fleet drawn from the Bay of Biscay, from Gibraltar from Suez and West Africa shadowed the Russian squadron. The great English fleet was first alarmed. They then threatened the neutral countries to be visited and tried to persuade them to create difficulties for the Russian fleet whenever they berthed in their harbours for coal bunkers. England at that time had an alliance with Japan. Therefore she tried to hinder the voyage of the Russian fleet to the Far East so that Port Arthur could, in the meantime, be occupied by the Japanese.

Even the French, allies of the Russians at that time made it nearly impossible for the Russian fleet to take on coal at Dakar. Tiny Portugal, completely under the influence of England, dared to threaten the 25 ships of the Russian East Asian fleet, with their little canonboatthe "Limpopo" at the Great Fish Bay and Tiger Bay, south of Mocamedes in Portuguese Angola. Officers and crew of the Russian fleet, depressed by the endless and slow journey with their old ships in the tropical heat and often heavy seas, were disgruntled with the whole voyage to the Far East.

Fearing the supremacy of the Japanese fleet, they felt that they were treated by the whole world like the plague, avoided, despised and followed with suspicion. However, the Russian fleet could always rely on the punctual arrival of German coalsteamers. Despite English and Japanese threats and objections (for the past year England was anxiously viewing the build-up of the German war fleet known as "Willi's toys") Emperor Wilhelm II, a friend of the unfortunate Tsar Nikolaus II, had adequately supplied the Russian fleet with coal ships of the Hamburg/America lines.