When the Russian Fleet visited Lüderitz and Dar-es-salam, Part 1, by Dr. Hans Schmiedel (1975) 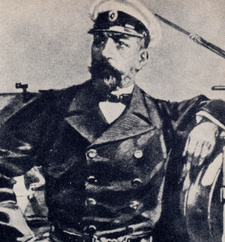 The tragic hero of the Russian fleet Admiral Rozhdestvensky. With acknowledgments to No. 18 International History Magazine "Tsushima". When the Russian Fleet visited Lüderitz and Dar-es-salam, Part 1, by Dr. Hans Schmiedel (1975)

The hero in the book "Peter Moor's Journey to S.W.A." ("Peter Moor's Fahrt nach Süd West"), written by the Schleswig-Holstein author Gustav Frenssen, relates: Someone had received a letter from Swakopmund, which stated that everyone in Germany was talking about the war between Russia and Japan. However, no one mentioned us. We were even scorned at home and our local misery was ridiculed as we were considered to be fighting for a silly and lost cause. They did not wish to know much about us because we were unable to achieve swift victories. A veteran soldier of the German Schutztruppe read the letter and remarked laughingly: "Why are you surprised? Has this not always been the case? How many wives does the King of Siam have? What garter does the Queen of Spain wear? What reply did you get to your postcard which you sent to the Japanese Commander? You see, these are the things that interest the Germans. You should hear how the English make fun of us - we are blabbermouths and village idiots. The English however, ask themselves in each case: "How do I and England benefit."

At that time, being a 16 year old scholar in Eisenach, I must admit that I did not feel very much different from Peter Moor in 1904. While being confined to hospital, I received pretty picture-postcards depicting Russian battleships every two days from an aunt in Finland, which was then a great principality still part of the Russian Emperial Empire. My father, at the time a missionary in Japan, received picture-postcards from former Japanese pupils of his entrenched in front of the Russian seaport of Port Arthur. Which side should I as youngster choose? The war between Russia and Japan fascinated me much more than my friends.

I hardly read anything in the newspapers about the great uprising of the Hereros and Hottentots against the German rule in South West Africa, or were these very German occurances not important enough for me? (I may mention here that 40 years after Germany lost her colonies they became the most important aspect of my research!). Captain Friedrich von Erckert, who later became famous for his Kalahari mission against Simon Koopman, wrote to his family on the 12th December 1904: "The Russian Fleet has anchored at Lüderitz. He had just landed at Lüderitz from a troopcarrier. Erckert, very prone to seasickness, had a pleasant sea voyage, except for the last days before reaching Lüderitz, when the sea became very rough.

Erckert went into battle against Morenga in the Great Karas Mountains with the 4th Battalion of the 2nd Field Regiment where he was too fully occupied, with his 12th Company stationed at Lüderitz, to bother further about the Russians. Nothing more was said about this event and therefore I feel I must elaborate. It is strange that I could obtain so little information regarding the berthing of the Russian East-Asian fleet at Lüderitz. The editor of this Annual was kind enough to make a search for further particulars of the visit of the Russian fleet in the archives of the Swakopmund newspapers and in the old Gazettes of the German Government.