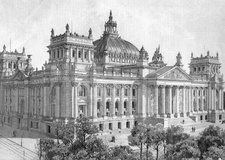 Although initially lacking much desire or any means to in­fluence colonial policy, the Reichstag had by 1892 gained the right to define the colonial budget and regulate judicial matters as well as to question the government on all colonial affairs.

Conclusion and Bibliography: The Evolution of German Colonial Administration from 1884 to 1919.

Germany had acquired its colonies without prior consulta­tion of the parliament. Initially, the German Emperor assumed com­plete authority over the colonies. The administrative responsibility however rested with the German Imperial Chancellor, who was aided in this task by a few civil servants from the Foreign Office. However, due to the failure of the Chartered Company scheme, Germany was soon forced to assume full responsibility for all its African colonies. In 1891 the Imperial government expanded the Foreign Office to handle the increased administrative burden. A Colonial Department, headed by a Colonial Director, was set up as the fourth division of the Foreign Office. Following the German national elections in 1907, the German Imperial administrative structure for the colonies was finalized with the creation of an independent Colonial Office. This im­portant step reflected a new more positive attitude towards colonial development held by both the government and the Reichstag.

Although initially lacking much desire or any means to in­fluence colonial policy, the Reichstag had by 1892 gained the right to define the colonial budget and regulate judicial matters as well as to question the government on all colonial affairs. In spite of these accrued powers, there is little evidence of direct interference by the legislative body in German colonial policy between 1892 and 1907. Lack of pertinent information, poor communications and the strong anti-colonial attitude in the Reichstag were the main reasons. The consensus was that the colonies only created an un­necessary financial burden. But, since the government never yield­ed to parliamentary demands to abandon the colonies, the Reichstag aimed at least to keep expenditures as low as possible. Little attention was given to local policies pursued in the colonies. A corollary to this Reichstag policy was necessarily the prevention of rebellions, which would have incurred increased expenditures. The acrimonious 1906 colonial debates in the Reichstag, which condemned the undue harshness of colonial officials, were largely motivated by this fear of revolt and additional expenses.

Given this passive attitude, there was little reason to interfere with Governor Leutwein, who pacified South West Africa within a year and followed a course of peaceful expansion. It was however indicative of things to come, that the only significant interference in the South West African administration of Leutwein was the 1903 suspension of his protective credit regulation at the behest of the European population. Although no rebellion as such occurred between 1890 and 1903, violent indigenous resistance to German penetration in German East Africa assured the prevalence of lengthy military operations and did not allow the formulation of an effective administration or of an overall colonial policy. As a result, the role of the Reichstag was necessarily restricted. Its only concern therefore remained a negative one, that is to say, the limitation of colonial expenditures.

In 1907 this situation changed radically. To begin with, the German Reichstag election of that year was fought on the colo­nial issue; colonies as a national asset rather than a liability. The electorate returned a pro-colonial majority eager to fund the colonies, as has been seen in the case of the northern railway in East Africa. Moreover, the stage of initial penetration of East Africa was completed and an increasing amount of civilian personnel undertook administrative duties. Rechenberg became East Africa’s first civilian governor. The expansion of colonial administration after 1907 resulted in closer and more frequent contacts between Germany and the colonies. The formation of settler associations anxious to communicate their demands to the home government also supplied the Reichstag with information hitherto unavailable. All these develop­ments enabled the legislature to utilize the powers it had earlier gained through the Protectorate Law of 1886 and the Financial Law of 1892 to actually intervene in the colonies and even reverse Governor Rechenberg’s colonial policy in East Africa. In South West Africa, the Reichstag’s new interest found expression in its sup­port of settler demands for more land and increased political rights, which resulted in the repression of the indigenous population and in the introduction of a limited form of parliamentary government.

Doctoral thesis, accepted 1973 at the University of Dar es Salaam