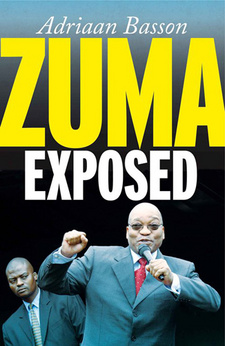 In his book 'Zuma Exposed', award-winning investigative journalist Adriaan Basson reveals the truth behind Jacob Zuma’s presidency of the ANC and South Africa.

'Number one is desperate now. He will do anything to stay in power,' says the man opposite me, sipping on his second cup of black coffee. He is an ANC man, a hard man, born and raised in the struggle. He is worried. Speaking about the decline of the movement he believes in with his whole heart doesn't come easily. He is scared. I need to take out my cellphone battery when we meet. 'Paranoia has set in at the highest levels. The amount of tapping going on is fucking crazy. All comrades now have two or three cellphones,' he says in a hushed voice, frowning. I don't know if he's telling the truth. I've seen the two, three cellphones when I meet sources in bars, restaurants or parking lots. There's the official number, the unofficial off-the-record number and the deep-off-the-record number. I often make the joke that if all the people who believe they are being bugged are really being listened to, that leaves half of the rest of the population to do the tapping. It doesn't matter if the paranoia is based on real evidence or perception. Perception is truth, and in the months leading up to the governing ANC's 53rd national elective conference in Mangaung, paranoia has set in at an unprecedented level. Comrades are scared about whom they speak to, where they eat or who they are seen with in public. 'Try to come with a different car next time. Park on the other side of the building. And don't call me on my official phone, ever,' says the hard man. He's just explained to me why, despite his flaws, Zuma should be re-elected at Mangaung. 'This one-term shit will cause instability, not only in the ANC but in the whole country. If we start kicking people out after one term we will end up with a civil war, like the rest of Africa.' Wow, what a reason to re-elect a party president, I think: to prevent civil war. Hard man says that the ANC is acutely aware of Zuma's flaws and will put a 'ring of steel' around him in his second term, which means he won't be allowed to make important decisions unilaterally. Another comrade, an ANC woman who has given most of her adult life to the party, says she's advising her kids to go study abroad and get residency overseas. 'Look what this man is doing,' she says, with disdain for Zuma in her voice. 'He only cares about himself and his family. This is banana republic stuff.' It is a few months before Mangaung and President Jacob Gedleyihlekisa Zuma is fighting the political battle of his life to stay in power. Although he had told journalist Moshoeshoe Monare in 2008 that he would 'prefer to leave after one term', Zuma later denied this, saying he would never say such a thing because it was up to the ANC to decide if he would serve one or two terms as president. Five years after defeating Thabo Mbeki convincingly at Polokwane, Zuma was on the ropes, fighting fire after fire over his handling of the multiple crises in his administration. The party of Oliver Tambo and Nelson Mandela was, again, searching for its soul, which, according to loyal comrades and opponents of the ANC, had become corrupted. Something was rotten in the state of Zuma. While I was writing this book, the ANC in the Northern Cape elected a provincial executive. Four of the five members elected to lead the party in this province for the next five years were implicated in corruption or fraud scandals. [...]

This is an excerpt from the book: Zuma Exposed, by  Adriaan Basson.