Where the Ancestors speak: A Himba experience, by Jill Kinahan 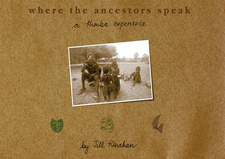 Jill Kinahan's book, Where the Ancestors speak: A Himba experience, is an inspiring book and a short read that is bound to give much food for thought. A Himba experience with a folktale recorded and illustrated by Ben Muhonje.

The OvaHimba of Kaoko are a Herero-speaking people who live with their cattle, sheep and goats in the dry, mountainous areas of northwest Namibia. Important to their existence is the Kunene River which brings flood waters from the highlands of Angola to this arid region. In years of good rain, the women cultivate small fields. During the dry season, the Kunene woodland shelters and feeds all living things. Along the riverbanks many stone cairns mark the burial places of Himba ancestors. In 1992, the Government of Namibia made known its plan to build a hydropower dam on the lower Kunene to help provide electricity to the developing country. The magnificent Epupa Falls would be inundated. Fierce debate arose among a number of interest groups. The OvaHimba vehemently opposed the scheme. Not only would a considerable area of their grazing be flooded, but so too would many graves of their ancestors. This issue runs deeper than outsiders might at first understand because the wellbeing of both the people and cattle is intimately related and dependent upon the blessings of the ancestors (pvakum). All good fortune comes from them, and all bad luck, disharmony and illness stems from offending them. Himba ancestors give advice and guidance through the elders, who function as priests to link the living with the dead. Anyone in trouble, need or sickness may ask their eldest living male relative to intercede on their behalf. The elder sits by the holy fire at the shrine (pkuruwo) of his father's lineage (pruzo), and asks for guidance, invoking his paternal ancestors by name from the most recently deceased all the way back as far as he can remember. The ancestors form an unbroken chain reaching back to God (Ndjambi or Mukuru). The path that the elder takes from his house to the okuruwo links his people with their ancestors and is sacred; it is an insult for outsiders to cross it. In special cases, the elder may seek direct communication by praying at the graves. Disturbing, flooding, or removing ancestral graves from the living relatives is as unthinkable as "cutting a baby in half", in the words of a Himba spokesman at the time of the dam controversy The ancestors' advice in times of trouble often entails the sacrifice of sheep or cattle, which lubricates all social relations and restores harmony. People are not only socially and economically dependent upon cattle, but cattle are an essential part of their spiritual life. Large oruzo herds are kept sacred and are subject to many taboos. Oruzo cattle belong to the ancestors in the spirit world and are kept for them until the death of their keeper, the priest and head of the lineage. When the elder dies, the cattle are slaughtered. The elder is wrapped in the hide of his favourite ox, and buried facing to the east. His walking stick may be snapped in two and laid with his sandals, and sometimes also his beeswax horn for calling the cattle, on the burial mound. All the meat from the oruzo cattle is eaten at the burial feast and the skulls with horns put up on stakes at the grave. The elder will enter the spirit world accompanied by the holy cattle. His successor in the male line will become the new keeper of new oruzo cattle and a new okuruwo, and will intercede with the ancestors. When he does this, he will first call upon the lineage head who has just died, and who has detailed knowledge of the concerns of his living family. Graves are mostly at dry season camps on the river banks, where people are most likely to die, or where elderly people will remain year round; they are also often on routes, perhaps as metaphor for the journey from life to death and beyond. In simple terms, the graves may be taken to represent land claims. They mark the place of the lineage. Elders hold the land in trust for their communities, and may not "sell" or otherwise dispose of it; it is inconceivable for anyone to be compensated for the loss of it either. These two processes of selling land or being compensated for it do not exist in Himba customary law. When my husband John Kinahan became involved in the pre-feasibility study of the Epupa Dam scheme, I wanted no part in the controversial project. However, he thought it essential to find out what archaeological remains would be drowned forever were the project to go ahead in this relatively unknown area. [...]

This is an excerpt from the book: Where the Ancestors speak: a Himba experience, by Jill Kinahan.

Discover Musical Cultures in the Kunene. A Guide to the Living Music and Dance of Namibia