When the Lions came to town: The 1974 Rugby Tour to South Africa, by Luke Alfred 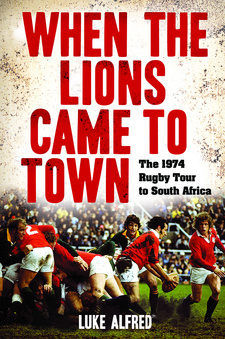 Insightful, provocative and frequently amusing, When the Lions came to town: The 1974 Rugby Tour to South Africa casts a fresh eye on a divisive but undeniably colourful period in South African political, social and sporting history.

Prologue: A dream of all that is good in rugby

In August 1962, Springbok centre Mannetjies Roux scored a try against the British Lions that has subsequently been immortalised in South Africa's rugby folklore. While it was an important try - and a barnstorming one - there is no obvious reason to explain why it should have fallen on such fertile ground, why it should have, over the years, inspired songs and sentiment, television programmes and pilgrimages to Roux's home in the Karoo. Is it because it chimed perfectly with a moment of national becoming, in the year after South Africa declared herself a republic, the try representing a symbolic moment of independence through an act of individual sporting brilliance? The Afrikaner historian and rugby lover Hermann Giliomee has spoken of the try's zest and ingenuity', and there is a strong echo in Roux's passage of play of the wily Boer pulling a fast one over a traditional foe. Perhaps the try has been remembered so fondly because it somehow seemed to be the culmination of the inevitable. The Springboks always beat the Lions, after all; it was as preordained as the frosts of a Highveld winter. While the 1962 series was close - the first Test was drawn, the second won by the Springboks by only three points, the third by only five - the Springboks still had not lost a series to the Lions since 1896. Yes, the 1955 series had been shared at two Tests all, but the Springboks had won their two Tests well, while the Lions had won theirs narrowly. The Springboks scored 79 points in the series to the Lions' 49, outscoring the Lions by 16 tries to 10. Not until Willie John McBride's 10th Lions toured South Africa in 1974 would the apparent natural harmony of the relationship between the Springboks and Lions be broken. Looking back at footage of Roux's try, it is, in fact, a remarkably straightforward first-phase score. The ball is won by the Boks from a lineout on the far side of the field, with the late-afternoon sunlight pouring across the Free State stadium, the turf bleached white by the frosts of winter. It takes some time for the lineout ball to be controlled, but, eventually, the bouncing ball is calmed and it finds its way down the line, the action moving from left to right across the frame. In what might be a predetermined move (it is hard to say), the Springbok centres have drifted together and they attack the Lions centres almost shoulder to shoulder. Suddenly the match is telescoped into a remarkably tight space with Wang Wyness, Roux's inside centre, passing to him shortly before he manages to weasel past his onrushing defender. Having squeezed around the first wave of defence, Roux has open space before him. He deftly rounds the Lions fullback and sprints towards the line to score. The try is surgically precise, canny and, in the context of a tight match, unexpected. Through his enterprise and audacity, 'Mannetjies', the little man, has managed to nutmeg two defenders and score a defining try, his physical brilliance supported — and led - by his mischief.  [...]

This is an excerpt from the book When the Lions came to town: The 1974 Rugby Tour to South Africa, by Luke Alfred.

When the Lions came to town: The 1974 Rugby Tour to South Africa

When the Lions Came to Town vividly recreates a tumultuous rugby tour in 1974 that sent shockwaves through South Africa.