What if there were no Whites in South Africa?, by Ferial Haffajee 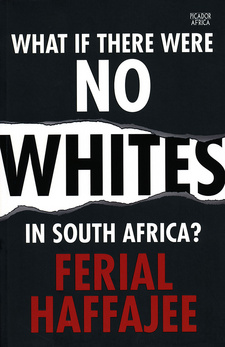 The author of this contemporary study, 'What if there were no Whites in South Africa?', Ferial Haffajee, is one of South Africa's thought leaders and social commentators.

I am controlled by a white guy. Golden, when I look at him properly. Mishka. A gangly, golden Labrador who tries to tell me what to do from the morning to the night. Beyond him, my complexes about racial superiority and inferiority have left the building - it has taken years and the arrival of freedom for that to happen. Perhaps because I grew up reporting the making of the Constitution and now enjoy the opportunities and protections of that sacrament, I feel my equality in deep and appreciative ways. Equality is a pillar of our Constitution and after having grown up feeling like a child of a lesser god, equality is a living concept for me. Of course, I am infuriated by former and unreconstructed privilege. I had been reading on invisibility. Then I went to the movies. I was asking the manager something when a woman came straight up and proceeded to tell him about blocked toilets. No excuse me, no nothing. I objected, because that is what growing selfesteem does to you. Im talking to him, I said. The lady looked at me as if I'd dropped from Mars. 'What's your problem? You're so rude.' I wasn't rude; I'd merely stepped out of the role she had planned for me and in doing so I upset the pecking order she had grown up with. I was invisible to her except, possibly, in servile roles she had come to expect of people like me. I am 34 years old and about to get my dream job. Always a little in love with the Mail & Guardian, I have returned to it again and again like a homing pigeon in my first 15 years as a journalist. Now the editorship is up for grabs and I'm the front-runner. The feeling of a bubble bursting for me is hearing that two colleagues have put together a last-minute bid to get the deputy to apply late for the position. Competition is positive but their rationale is not good. That I do not have the gumption to stand up to power. Why? There is nothing in my working history or my published work to give that idea. The perception is grounded in what I am. Black. A woman. Like the woman at the movies, they had a space for me in the hierarchy of what it took to be brave and to be an editor. Being black, being a woman wasn't in that space. My neighbour in Parkhurst rings the intercom. 'Hi, is Muriel there?' Five years on and I am 'Muriel'. I sigh. I've given up. I've worked at it, dropping notes, dropping cakes, saying hi. Where I come from, neighbours know each other's stories and lives. This suburban culture feels impenetrable sometimes. Surely he should know my name by now? I figure that I do not feature in my neighbour's frame of reference and so even my name is a fold of the tongue too far. There's a television producer I've long admired for her crisp programming. We move in similar circles, but every time we meet she asks, 'What's your name again?' And then she looks me up and down and declares me more glamorous than she thought. [...]

This is an excerpt from What if there were no Whites in South Africa?, by Ferial Haffajee.

What if there were no Whites in South Africa?

What if there were no Whites in South Africa? A provocative question that yields some thought-provoking analysis.