Violence as Usual. Policing and the Colonial State in German Southwest Africa, by Marie Muschalek 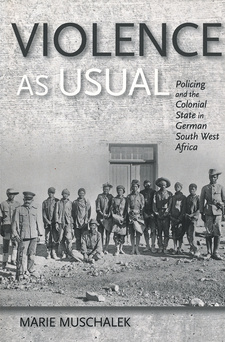 Policing Work: Violent Regulation of the Labor Market is a chapter from the book Violence as Usual. Policing and the Colonial State in German Southwest Africa, by Marie Muschalek.

Colonial regimes of the nineteenth and twentieth centuries dealt in economic exploitation. Pressured from the metropoles that paid their bills, colonies needed to be productive and thriving. By the end of the nineteenth century, the system of chattel slavery that had so powerfully affected Atlantic societies was on the wane, while a new, global, and more insidiously coercive system of "free labor" under a capitalist framework was under development. Most colonizers by the turn of the twentieth century tried, both in theory and in fact, to produce wage labor systems that encompassed the metropole and the colony. As within Europe itself, one of the most powerful instruments for disciplining colonial populations into a wage labor system was violence, both of a spectacular and an everyday variety. And the typical state instrument for such violence was the police. Between colonial and settler colonial settings, labor economies differed, however. Whereas in the former setting the primary goal was to extract indigenous labor, like other resources, for the greatest economic gain, in the latter the long-term aim was to expropriate and displace/eliminate the indigenous population to ensconce a settler population instead. Thus, even though indigenous labor "was indispensable to Europeans" and their settlement project, as Wolfe states, "settler-colonization's dominant feature is not exploitation but replacement." To what extent this conceptual distinction between colonialism and settler colonialism is an antithetical one or rather of variation is currently under debate. In German Southwest Africa, the tension between a logic toward elimination of and dependence on African labor was most palpable in the aftermath of the genocidal war against the colonized population. There, the limited supply of labor, caused by the genocide, was the single most important factor limiting economic growth between 1908 and World War I. Hence, securing and regulating African labor was one of the foremost interests that guided state policy in that colony. In the German state's logic, only absolute control of the colonized could ensure a functioning, profitable economy. It fell to the Landespolizei to install that all-encompassing control. Thus, most police work was a matter of policing work. Whereas the last chapter addressed the former, this chapter deals with the latter. The colonial economy of German Southwest Africa was built on a semi-free labor market - semi-free because even after forced labor, which had been instituted during the war, was officially abolished in 1908, aspects of the system remained quite overtly coercive: men and women who did not wish to enter the colonizers' wage economy and were trying to hide in the outskirts of the colony or outside the Police Zone were forced into it by numerous measures; workers who left their employment before the end of the contracted term were brought back to their employer by force; Africans were restricted in their mobility and could not choose their workplace; and, of course, forced labor continued to exist as a penal practice. The mode of production settlers put into place - sedentary cattle farming on privately owned, apportioned pieces of land - aggravated economic dysfunction. The fact that African labor was scarce after the war intensified the situation even further and made settlers fight among each other over the labor force. The railroad construction and mining companies vied for the precious resource as well, especially after diamonds were discovered in 1908. In 1911, about fifteen thousand workers were presumably lacking in a country with a colonized population of about seventy thousand and an ever-increasing colonizer (that is, employer) population. [...]

This is an excerpt from Violence as Usual. Policing and the Colonial State in German Southwest Africa, by Marie Muschalek.

Violence as Usual. Policing and the Colonial State in German Southwest Africa

Violence as Usual: Policing and the Colonial State in German Southwest Africa is about the power of violence.