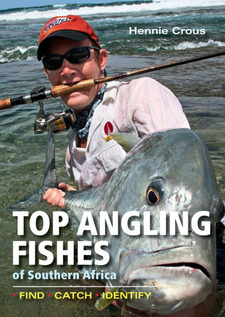 This is Hennie Crous' description of the Black Musselcracker from his book Top Angling Fishes of Southern Africa.

Name: The Black Musselcracker probably has more common names than any other angling species. Some of those used frequently are Poenskop, Black Steenbras, Bank-Blouer and Swart Biskop. Deep-water gullies are often the most productive areas to target this species, in both rough- or calm-water conditions. Distribution: The southernmost limit of their distribution was once regarded as False Bay, it is now more realistic to regard Cape Agulhas as the cutoff point. The coast between Stilbaai and the former Transkei is considered to be a prime area, and larger specimens are still taken in the deeper water surrounding rocky headlands. Description: This robustly built fish's big head is similar to that of the Musselcracker, Sparodon durbanensis, complete with powerful jaws and teeth capable of holding and crushing its prey. The bigger it becomes, the more humanoid the frontal view of the head becomes. The enlarged 'nose' or snout that develops with age gives it the appearance of a man with a prominent nose. The coloration of the adult is mostly blue- or steely black with a white belly, while juveniles of the species are a khaki colour with yellow streaks. Size: Black Musselcracker are known to grow larger than 35 kg, with 44 kg the biggest unofficially recorded catch. In general, they tend to favour deep, rocky reefs and ledges closer to the shore, but most of the Black Musselcracker landed from the shore are smaller in size. This is not because younger specimens prefer shallower water, but rather because it takes a lot of skill and luck to haul a big fish out of its usual territory. Larger, solitary Black Musselcracker prefer reefs and pinnacles in deeper waters.

Habits and feeding: Smaller specimens of Black Musselcracker may occur in shallower water, although they will not roam as close inshore as the Musselcracker. They patrol the deep gullies around headlands and the deep water close to rocky ledges for prey such as crabs and crayfish. They also prefer clearer, warmer water. Being particularly sensitive to changes in water temperature, Black Musselcracker will almost instantly go off the bite when the water suddenly cools down.

Fishing techniques: This powerful fighter is difficult to catch from the shore, simply because of the rocky terrain it frequents and its ability to put up a good fight. When fishing from rocky ledges into deeper water, you will require heavy tackle to stand a reasonable chance of landing a brag-size Black Musselcracker. A 4m rod with a medium to heavy tip is required to cast the bait the required distance and to hold a hooked fish, preventing it from reefing you in the first available rocky structure. A long cast is a definite advantage when fishing the rocky ledges off a beach, where the ideal spots are only accessible at low tides (spring low tide being even better). Especially when fishing at a popular or easily accessible spot, the longer the cast, the better the chance of a hook-up. A line of at least 12 to 15 kg breaking strain on a reel with a smooth and durable drag system is a must. In fact, a 12 kg line may be too light, but it makes a longer cast that much easier. Fishing with braid would definitely be an advantage but is very expensive.

The ideal terminal rig would comprise a strong nylon hook trace, together with a sinker trace that is thinner than the mainline and thus likely to break if hooked up during the fight. There are very strong, chemically sharpened hooks on the market, and it pays in the long run to spend a bit extra to improve your chances of a hook-up. Hook sizes can vary between 5/0 and 8/0. The size chosen sometimes depends on how skilfully the bait needs to be presented, since on some days Black Musselcracker fiddle with the bait without any real intention of running away with it. Crabs, a fillet of fish such as Karanteen or Steentjie, or even a whole fish (live or dead) can be used as bait, as well as rock lobster, a small Octopus or even red bait or mussels. It is also possible for anglers fishing from a boat on deeper reefs to hook a Black Musselcracker. Although the advantages of being on top of the fish and having the ability to manoeuvre the boat in tricky situations make it easier to control the fight, a short pump stick is still the ideal rod to use.

It may also be a good idea to use lighter line, as being able to follow the fish reduces the likelihood of the line being snagged. This all depends, however, on local knowledge of the reef structure and, of course, the size of the Black Musselcracker on the line. When fishing in shallower water, such as the near-shore areas of Cape Agulhas and Arniston, a good strategy is to fish in the stretch of water that is beyond casting distance from the shore, but closer in than where boats normally fish. Although often quite rewarding, this depends entirely on the water conditions and, even when the sea is calm, the angler needs to keep a constant lookout for abnormal swells. Eating qualities: The flesh of the Black Musselcracker is excellent to eat and, unlike some other species where the flesh of the larger specimens becomes coarse, the size of the fish does not make a difference with this species.

This is an excerpt from the book: Top Angling Fishes of Southern Africa, by Hennie Crous.

Catch it, cook it in Southern Africa

Catch it, cook it in Southern Africa bridges the gap between catching your fish and bringing it to the table.

Saltwater Fishing in South Africa is a practical guide to the how, when and where of angling along the South African coastline.

A Guide to the Common Sea Fishes of Southern Africa

Practical, easy to use and authoritative guide! More than 300 common sea fishes ot the coastal regions of Southern Africa.