The Unexploded Boer, by Erich Rautenbach 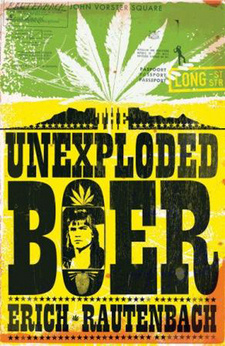 Erich Rautenbach’s memoir 'The Unexploded Boer' describes a chaotic, illegal and drug determined phase of life of a Namibia born prowler in the Hippie scene of District Six and the Bo-Kaap of Cape Town during the 1970s.

'This,' muttered the small, dark-haired man, ‘is a Parabellum with dum-dum bullets.' A what? The entire natural world seemed to anticipate his words before he spoke them. The clear, cold sunlight played through the trees, fracturing like in one of those Bergman movies that film buffs would watch at the old Labia Theatre on Orange Street in Cape Town, where the street curves near the Mount Nelson Hotel with its colonnades and tall palm trees. He said it so softly. He didn't shout. Perhaps he had rehearsed that line for months in front of the mirror at his mother's house, angling his face this way and that, flipping up the collar of his jacket, adjusting the light and hoping to look cool to ... whom - to me? Is this some fantasy script, me just a bit player in his personality opus? What the fuck is the point of telling me the make or the specs of his gun? I lowered my gaze from his face and saw the object in his hand. It was pointed directly at my head through the open window of the Volkswagen. Shit! The morning sun glinted on the dull metal. My hung-over brain tried to catch up with his statement as I sat there in the passenger seat with the money and the dope in my lap. I wouldn't even have pegged him for a cop, with the standard joller look about him, the slightly cool mullet, leather jacket and earring. Like a small-town guy trying hard to be hip in the big city. The money was in a cloth bag with the Standard Bank logo. I nicked my eyes to the side and all my friends were gone, way down in the yard. They knew to move away when guns were in play... When I'd woken up that morning things were weird, but when you are young and stupid you get used to the weirding of things. That morning I woke up in Endicott's garage, which was separate from the house, at the end of the driveway. Now, I admit that I had at times regained consciousness in funny places after I'd just got too tired and crawled away like some animal to lay down my weary head, but this was indeed one of the oddest. I woke up under a pile of wood, lumber, planks. While I was sleeping, somebody had covered me in wood, a big heavy pile of it. Not just a few pieces, but enough for a fence-building party. Who the hell would do that? Early in the morning, I'd wriggled my way out of the woodpile and staggered out of the garage, babelas from the bottle of brandy I'd been drinking the evening before but feeling okay, young and strong. Life - let's do it again! I went out into the sunny chill of late autumn and across to the kitchen.‘Hey, where the heck were you last night?' Endicott asked in a slightly accusing tone. CI was here, I got tired and fell asleep in the garage,' I countered. 'It's been a long trip. I'm sorry, man.' - 'Bullshit. We looked for you in there, but nobody found you, and Donny took off,' he stated flatly. - 'I was covered in wood,' I said. 'Who did that?' - 'I have no idea what you're talking about. Maybe you should cut back on the drinking.' - 'Maybe. I just want to get this finished and leave this place, Endicott,' I explained wishfully. 'I just want to get to my life. This is my last trip and then I'm going, getting the fuck out of here.' – ‘Ja well, they're gonna come back this morning, my brother and his friends. Want some coffee?' - 'Naah, I just need some tea and a cigarette and I'll be okay' - 'This is a Magnum .357,' said a second cop as he leant through the driver's window and stuck a huge gun in my face. I turned and looked into two hard eyes, set close together in a big meaty head, staring down the barrel and ready to fire at the target - me. 'Now run!' At that moment universes disintegrated. Futures fell apart. Possible futures became never. [...]

This is an excerpt from the book: The Unexploded Boer, by Erich Rautenbach.

Written in an electric and hilarious style, The Unexploded Boer is destined to become a cult classic.

Rescued from the maw of Hillbrow’s drug and prostitution underworld

Essential information on a wide range of legal issues, from criminal offences to personal finances