The Springbok Handbook, by Eddie Grieb and Stuart Farmer 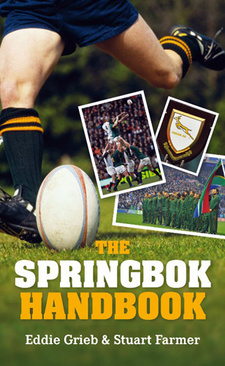 Eddie Grieb's and Stuart Farmer's handbook on Springbok rugby team contains everything there is to know about the Bokke, from the very first match played in 1891 to the present.

The name Vula Maimuri might not ring any bells for most rugby fans, but it meant a lot to Eddie Grieb. Maimuri, a Fijian forestry worker from Awanui, one of the northernmost clubs in New Zealand, was drafted into the Highlanders for the Super 12 in 2001. And it was there, at Carisbrook in Dunedin, that Maimuri won his place in the record books, thanks to the keen memory of a rugby fan -and Eddie Grieb's dedication. Early in the 2008 season Keegan Daniel scored an incredibly quick opening try for the Sharks against the Blues at the Absa Stadium. Newspaper reports variously noted that the try had been scored between 15 and 21 seconds after the opening whistle, but Eddie timed the tape himself and established that Daniel touched down in 16 seconds. Thus Daniel went to the top of list as the scorer of the fastest try in Super Rugby history, displacing Chris Latham who had scored within 21 seconds for the Reds against the Brumbies in Brisbane. But then, in this wonderful age of instant communication, an e-mail arrived from a New Zealander stating that there had been a quicker try, namely by Maimuri in a match in the 2001 season. Instead of dismissing the claim, Eddie drove from Pretoria to SuperSport's studios in Randburg and drew the tape of the match -Highlanders vs Crusaders - from the archive to check for himself. And there it was, confirmed by the match clock and Eddie's stopwatch. Maimuri scored in just 12 seconds, and has now duly been credited with the fastest try in the list of Super Rugby records. Statisticians like Eddie, and his dedicated cohorts throughout the world, perform a vital task in rugby that is seldom acknowledged by the media, even though the scribes make constant use of their facts and figures. And thanks to the statisticians, players whose feats might otherwise go unnoticed and unrecorded, are given due credit. With The Springbok Handbook Eddie has not only produced a fascinating record of Springbok rugby to be picked up and pored over, but has done a great service to the game. I know it will become a valuable reference in my collection of rugby books.

This is an excerpt from the book: The Springbok Handbook, by Eddie Grieb and Stuart Farmer.

The Springbok Handbook consists of many facts about the ‘Bokke’ plus a special section on the World Cup.

If you only read one book about Rwanda and its infamous genocide, make it Jacques Pauw's Rat Roads!