The Poisoned Chalice, by Gavin Rich 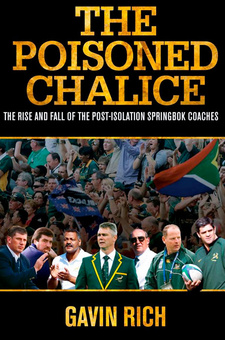 There have been books on the individual coaches, but in his book, The Poisoned Chalice, Gavin Rich resolves to tell the story of the Bok coaches as a collective in the post-isolation era, starting with John Williams, who was appointed in 1992 via a letter that consisted of just one line, through to current coach Heyneke Meyer.

Nick Mallett loves a good laugh, but, like most people, he doesn't enjoy being the butt of a joke. And as usual, South African rugby was making a laughing stock of itself That explained the former Springbok coach's irritation when he arrived at a Sandton hotel on a crisp Highveld morning in September 2006 for the meeting that the whole country seemed to be talking about. Rudolf Straeuli, who had been keeping a low profile while trying to recover his reputation following the infamous events that tarnished the Springboks' 2003 Rugby World Cup campaign, wasn't doing cartwheels of delight either as he flew in from Durban. As for Ian Mcintosh ... well, as an early victim but also a long-standing survivor of the weird, confusing and often cruel machinations of South African rugby politics, the wily veteran had seen it all before. He had, in fact, twice before attended meetings similar to the one he was about to take part in now - once when he himself was the Bok coach, when Louis Luyt had summoned 19 different coaches to Ellis Park the week before a Test against England in 1994, and again three years later, when Carel du Plessis was in charge. Du Plessis was at the meeting too. He had flown in from the Western Cape, as had Harry Viljoen. In fact, the only living former Springbok coaches from the post-isolation era not at the 2006 meeting, which had been called by South African Rugby Union (SARU) president Oregan Hoskins, were Professor John Williams and André Markgraaff. Williams lived too far away, on a farm near the Limpopo/Botswana border, to make it to Johannesburg, while Markgraaff had turned his back on rugby the year before, after he had challenged the business practices of the then SARU president, Brian van Rooyen. Markgraaff also disliked the incumbent Springbok coach Jake White, as he felt White too often and too naively poked his nose into rugby politics, which he knew nothing about. White was to be the focus of the meeting, which was being held to address a crisis largely of his own making: his team had suffered five consecutive defeats. The 18-34 defeat to the All Blacks at I.oftus the ptevious Saturday was the culmination of the negative momentum that had started with a home defeat to France and then haemorrhaged into a 0-49 annihilation at the hands of Australia. The Springboks had also lost to the Kiwis in New Zealand, and again to the Wallabies, in Sydney. Sections of the media and a great many South African rugby fans were calling for White's head with a passion and vehemence that in some countries would drive a vote of no-confidence in the national president. [...]

This is an excerpt from the book: The Poisoned Chalice, by Gavin Rich.

The Poisoned Chalice takes a deep look at the the rise and fall of the post-isolation Springbok rugby coaches in South Africa.