The Poacher's Moon: A True Story of Life, Death, Love and Survival in Africa, by Richard Peirce 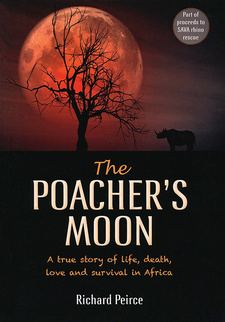 The Poacher's Moon: A True Story of Life, Death, Love and Survival in Africa is the story of rhino poaching on three game farms in South Africa's Western Cape. It is Richard Peirce's tribute to those who fight to safeguard the targeted, vulnerable species on our planet, and to Higgins and Lady, two rhinos that have survived the slaughter to see another dawn.

The female southern white rhino was 16 months pregnant and ready to give birth. She had a rounded look to her and her belly swung slightly as she walked. Her calf would weigh only 45-65kg, so even at full term it would be a relatively small foetus compared to its mother's massive three-ton bulk. The moon cast a perfect shadow of her as she walked slowly across the flat sandy area, heading for the cover of some trees and bushes a couple of hundred metres away. At the front of the shadow were two magnificent horns that rose to sharp points. It was a full moon, sometimes known as a 'poacher's moon', and later on, just such a moon would play a major part in the life of her new calf. A week ago, after chasing off her two-year-old calf in preparation for the new arrival, the cow rhino had left her crash (group of rhinos) and gone in search of a quiet place to give birth. She pushed the branches aside with her horn, and walked in and out of the moonlight, making her way through the shadows cast by the bushes and trees. She entered a small area of clear ground that had a slight depression in one corner. She circled the little clearing, stopping often to listen and sniff the air. Apparently satisfied, she lay down in the shallow depression, found a lump of wood and amused herself chewing it while she waited. Two hours later, lying on her side, she gave birth to a 50kg male calf, which arrived with a wet, squelchy, gurgling sound. The baby southern white rhino, which would one day become world famous and be known as Higgins, had made his undignified entry into the world. Higgins was standing on his wobbly legs within an hour and was soon trying to suckle. His was an experienced mother who helped manoeuvre him into position, and by the time he was two hours old he was steady on his legs and feeding contentedly. For the next two months Higgins and his mother were rarely more than a few feet apart, and very often he was in front of his mother and appeared to be leading the way. Higgins started grazing at three months and by then mother and calf were often in the company of other rhinos in their crash. At the time of Higgins' birth in 2000 the population of southern white rhino had recovered from near extinction. There were only a few hundred of them in 1900, rising to about 19,000 in the year 2000, mostly in South Africa. Higgins was born in the north of South Africa's Limpopo province, only a few kilometres from the border with Botswana. Four years later, in the southern Kruger National Park, a female calf was born whose life would eventually become entwined with that of Higgins and who would also become an unwitting global celebrity. She would later be known as Lady and, coincidentally, she was also born under a full moon. [...]

The Poacher's Moon: A True Story of Life, Death, Love and Survival in Africa, by Richard Peirce.

The Poacher's Moon: A True Story of Life, Death, Love and Survival in Africa

The Poacher's Moon: A True Story of Life, Death, Love and Survival in Africa is a disturbing but very good read on wildlife conservation.