The Passion for Reason. Essays in Honour of Frederik Van Zyl Slabbert, by various authors 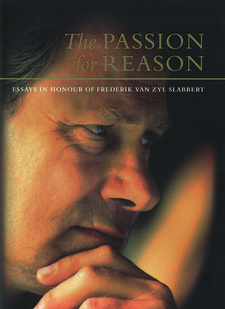 An amalgam that worked is the essay that Alex Boraine contributed to the book The Passion for Reason. Essays in Honour of Frederik Van Zyl Slabbert.

I first met Frederik van Zyl Slabbert in April 1974, but his reputation had gone ahead of him. Word had filtered up from Grahamstown to Johannesburg, where I was, concerning the young, attractive, charismatic, pipe-smoking Afrikaner who had become a guru to many students at Rhodes University. I had also watched with interest and admiration his political campaign, which led to his securing the Rondebosch constituency for the Progressive Party in May 1974. The reason for our face-to-face meeting was my nomination to contest the by-election in the Pinelands constituency, which was to be held on 12 June 1974. At the time, I was working at Anglo American in Johannesburg. Van Zyl and his vivacious wife, Mana, visited us for dinner to discuss strategy for the by-election. Jenny and I immediately fell under his spell. He is warm, very bright and has a quirky sense of humour. We talked politics, ate good food, drank wine, and a friendship was born. We saw a lot of each other in the run-up to the election, and when I managed to very narrowly win the election, he lifted me off the ground and exclaimed: Now we are in the shit together! We went into Parliament together and sat alongside each other on the back benches. The National Party members could not understand how we could be friends. Slabbert was a 'ware' Afrikaner, graduated from Stellenbosch University, which had produced so many of South Africa's National Party prime ministers. I was the English-speaking boere-hater who went to Rhodes University and was described as a liberal ex-priest. But Frederik van Zyl and I had more things in common than most people realised. Both of us were from working-class families who had known what it was to be poor. Van Zyl began his university studies in preparation for the Dutch Reformed Church (he very soon switched to sociology). I was studying to become a minister in the Methodist Church. Both of us, separately, taught Sunday school in dusty black townships! More importantly, neither of us had worked our way up the ranks from city or provincial councils. We were not professional politicians. Further, we were impatient with the formality and the procedures of Parliament and never, like so many others, fell in love with the place. Both of us were embarrassed by the Progressive Party's policy on the qualified franchise and worked quickly to change that policy to universal franchise. Van Zyl is rock-solid in his commitment to an open society, and I share this vision. Although Frederik van Zyl admired and even loved Helen Suzman, he felt that she and some other cold progs' really despised the Afrikaner, and some of their opposition to apartheid was confused with their antipathy towards Afrikaners. He felt that he was accepted almost as a token because he was the handsome golden boy, bright, articulate and civilised. I sympathised with him in this and it brought us closer in friendship, but also into an alliance to shift from politics cas usual'. This inevitably led to Van Zyl being promoted as the future leader of the Progressive Party. Despite his great admiration for Colin Eglin as a man of absolute integrity, he was keen to succeed him. Van Zyl has always been a leader and is most comfortable when he is in a leadership position. It's important to distinguish between Van Zyl as a parliamentarian and Van Zyl as the leader of the opposition. Before he became leader, he was polite and civil and overly academic in his speeches. His analytical prowess was without equal, but often wasted on the stubborn, arrogant government members. Reading his speeches today clearly reveals a brilliance and foresight that deserve a much wider readership. [...]

This is an extract from the book: The Passion for Reason. Essays in Honour of Frederik Van Zyl Slabbert, by various authors.

The Rise and Fall of Apartheid

This is an authorative, balanced and lucid history of the rise and fall of Apartheid in South Africa.

A Life in Transition. Alex Boraine

The other side of history: An anecdotal reflection on political transition in South Africa

The other side of history is Frederik van Zyl Slabbert's reflection on political transition in South Africa.