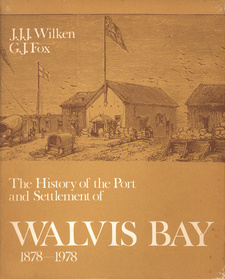 Much has been said and written about Walvis Bay in South West Africa but there is no complete record of its history. This book tells the history of the port and the settlement of Walvis Bay, and has been compiled from a variety of sources.

The first generating plant for the supply of electric current in Walvis Bay was accommodated in the building of Messrs SWA Cold Storage and Stock Farmers Ltd which was situated in the harbour at berth No 1. In addition to its own needs the company supplied current to the Railways and the Cottage Hospital. In 1932 the town council contracted with the company to supply electricity to the whole township. For this purpose it undertook to install two generating sets each capable of an output of not less than 90 kW. Because the residents were not compelled to utilise the service the council undertook to pay for a minimum consumption of not less than R480 per annum, the unit price being fourpence for power and sixpence for light. The SA Railways and Harbours eventually decided to erect their own power station which was officially opened in 1943 by the General Manager of the SA Railways and Harbours, Brigadier C. M. Hoffe. This power station remained in operation until the first municipal power station was erected in 1952 on Portion L/I of Portion B of Walvis Bay Town and Townlands No 1, in Ovenstone Street. However, soon after it was commissioned, it became evident that structurally the building was of poor design and that its foundations were unable to withstand the vibration caused by the four Diesel engines it was supposed to accommodate. As a result of the establishment at Walvis Bay of a pelagic fishing industry the demand for electricity increased by leaps and bounds and the council was, therefore, forced to erect a new and considerably bigger power station. The erection of this station was begun in 1953 and officially opened by the Administrator, D. T. du P. Viljoen, on 13 April 1955.

The new building situated on erven 383-396 was soundly constructed but in this instance the eight Diesel engines suffered one breakdown after the other because of excessive scale in the water jackets, due to a defect in the water softening system. After the defect was rectified the station delivered excellent service. The demand for power grew apace and a steam extension was added and opened by Dr J. Brandt, MEC on 31 August 1962. In 1963 the station was again enlarged by the addition of a further steam turbine and on 15 May 1968, the third steam extension was commissioned. At this stage the station had a generating capacity of 13 MW. In accordance with a recommendation of the Odendaal Report, the Walvis Bay power station was taken over by the SWA Water and Electricity Commission on 1 July 1972, and now forms part of the Windhoek - Tsumeb - Ruacana grid. In 1975 a second power station named Paratus with a generating capacity of 28 MW was erected at Walvis Bay.

The Sewage of Walvis Bay

Originally each individual member of the public had to undertake his own sanitary removals. A sanitary service existed for Government officials only. The disposal site was situated some two km outside the town where the nightsoil was buried after being covered with lime. Refuse was deposited on a site also situated on the outskirts of the town. At a later stage the SA Railways accepted responsibility for the rendering of sanitary services. Slopwater was removed by means of railway trucks drawn by mules and conveyed to the wharf where it was deposited in the sea. After the establishment of the municipality these services were taken over by the Council in December 1931. The Council engaged the services of a contractor to render the service on its behalf. In the absence of a sewage system, the slopwater was collected in containers with a capacity of 228 d and pumped into the sea through a pipeline. In 1940 the Council decided that the services would henceforth be undertaken departmentally and some time afterwards the more hygienic conservancy tank system was introduced and operated until the sewage reticulation system was commissioned in 1959.

The sewage scheme of Walvis Bay was designed by Messrs Hamlin and Partners. The scheme is unique in that the sewers had to be installed at a maximum grade of 1 400 m because Walvis Bay is completely flat and because the water table is on the average about 1 to 2 metres below the surface. Flow is achieved with the aid of pump and flushing stations where purified effluent from a separate pipe system is injected into the sewers by means of which the raw sewage is carried to the sewage works where it is purified and recirculated. Purified effluent is also used for industrial purposes whilst all the parks and sportgrounds are irrigated with purified effluent. In this way first-grade water from the Rooibank source is used economically whilst second-grade water is used for lawns and gardens. [...]