The Historical Karoo, by Chris Schoeman 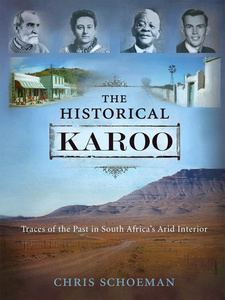 Chris Schoeman's splendid book, The Historical Karoo, is ordered according to three main routes that people drive through the area. It provides short histories of the towns along the way, and points out the sites, buildings and other aspects of interest that can be found there.

'In the Karroo you seem to be going up a winding ascent, like the ramps that lead to an Indian fortress. You are forever pulling up an incline between hills, making for a corner round one of the ranges. You feel that when you get round that corner you will at last see something: you arrive ind only see another incline, two more ranges, and another corner, surely this time with something to arrive at beyond. You arrive and arrive, and the more you arrive, and once more you see the same vast nothing you are coming from. Believe it or not, that is the very charm of a desert - the unfenced emptiness, the space, the freedom, the unbroken arch of the sky. And then it is only to the eye that cannot do without green that the larroo is unbeautiful, Every other colour meets others in harmony, tawny sand, silver-grey scrub, crimson-tufted flowers like heather, black ribs of rock, puce shoots of screes, violet mountains in the middle distance, blue fairy battlements guarding the horizon. And above all broods the intense urity of the South African azure, not a coloured thing, like the plants and the hills, but sheer colour existing by and for itself.'  Anglo-Boer War correspondent George Steevens, 1900.

The historical farm of Wagenaarskraal

Situated about thirty kilometres west of Three Sisters, has been owned by the MacRobert family since 1870. It is the only weather station in South Africa that has been run by one family for more than 100 years. In days gone by, it had a shop for the neighbourhood, which the MacRoberts ran from the latter decades of the nineteenth century until about 1960, a postal agency and a stagecoach post for coaches and post carts on the Wellington-Kimberley route (and later Nelspoort-Kimberley). The old post office and shop are still there, now a museum exhibiting documents and books of accounts dating back to the 1870s, as well as firearms from the Border, Anglo-Boer and World Wars used by the MacRobert family.' Wagenaarskraal played a key role in passenger and mail transport in the days when the railway from Cape Town only went as far as Wellington. Following the discovery of diamonds in 1867 and the establishment of a passenger and mail coach service between Wellington and Kimberley, Wagenaarskraal became an important halt on this route. The teams of coach horses were changed here, and passengers could stay overnight. Japie de Bruyn of the neighbouring farm, Abramskraal, was a skilled wagon builder and blacksmith who serviced the coaches and shoed the horses. The post office was established, and John MacRobert, the then owner of Wagenaarskraal, was its first postmaster. Later there was also a doctor, a tuberculosis expert called Dr Herron, who had come from Belfast. Several tuberculosis patients were housed in one of the farmhouses. One morning, the Wagenaarskraal mail coach arrived at Victoria West when it was hit by a flash flood in 1871. The driver, Johannes Hendrikus Brand Buyskes, carried many victims to safety in his coach. With the arrival of the railway line from Wellington via De Aar to Kimberley in 1890, the mail-coach service was discontinued, as passengers and mail could now be transported directly to Kimberleyr and the environs by train. As there was no longer a mail coach servicing Wagenaarskraal, a new postal service, the post cart, was created. Two of the original post-cart contracts are still in the possession of the MacRobert family one dating from 1917 and the other from 1923. According to these documents, the postal agent and contractor was William Mudie MacRobert of Wagenaarskraal. [...]

This is an excerpt from the book: The Historical Karoo, by Chris Schoeman.

The Karoo Cookbook is filled with delicious recipes that have been handed down from generation to generation.

The Garden Route and Little Karoo

This wonderful book displays the rainforest area of the Garden Route and the semi-desert of the Little Karoo.