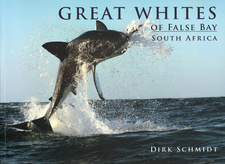 Dr. Dirk Schmidt, author of The Great Whites of False Bay, South Africa, hopes the reader enjoys the photography as much as he has enjoyed spending time with these sharks and capturing fleeting moments of their lives.

The Great White shark is undoubtedly one of the most well-known and most awesome apex predators of the seas and is also the largest predating fish on earth. The Great White sharks visiting Seal Island annually display a unique behavior during hunting and predation of seals, by occasionally launching themselves out of the water in pursuit of their prey. These breaches are spectacular and can be seen nowhere else in the world on such a consistent basis as in False Bay, South Africa, making it the prime destination for viewing these sharks in their natural environment. This book illustrates some of these Great White sharks in action, and also provides the reader with some background information on False Bay, Seal Island, the Cape Fur Seal and its sharks. False Bay is located in the Western Cape Province of South Africa and can be described as a body of water which is defined on the western side of the bay by the finger-like projection of land, known as the Cape Peninsula. It is a scenic bay, approximately 40 km across with the infamous Cape of Storms or Cape Point on its western shores, and Cape Hanglip on its eastern point. False Bay is still, to this day, used as a safe anchorage during the winter storms. The name 'False Bay' was applied about three hundred years ago, by sailors who confused the bay with Table Bay to the north. False Bay is also home to the South African Navy which is situated in Simonstown on the western side of the bay. The eastern and western shores of the bay are rocky and mountainous; in places large cliffs plunge into deep water. The northern shore, however, is defined by a long and curving, sandy beach, reaching from the coastal towns of Muizenberg in the west and to the Strand in the east. Seal Island is the only island in the bay, and forms one of the main breeding sites for the Cape Fur Seal. Seal Island is a small, elongated, rocky land mass about 2 hectare in size with its long axis orientated roughly north-south, measuring approximately 400 by 50 meters. The island is located about 5.7 kilometers off the northern shore of False Bay, and is so named because of the number of Cape Fur Seals that occupy it. The island rises a mere six meters above the high tide mark and is off-limits to tourists, falling under the jurisdiction of the Western Cape Nature Conservation. Seal Island is barren and devoid of any notable surface vegetation or beaches. The only noticeable evidence of humans ever reaching this desolate island is a solar powered light, remnants of a gas-powered lighthouse, as well as some rock inscriptions dating back to around 1930. Human interaction on the island was limited to guano collection and seal harvesting. Guano collection came to an abrupt end in 1949, followed by a collapse in the fur seal product market in the 1980's, bringing to an end the practice of seal harvesting on the Island. (...)

This is an excerpt from the book: The Great Whites of False Bay, South Africa, by Dirk Schmidt.

The Penguins of Boulders is a charming illustration into the lives of one of the most adorable and charismatic creatures in False Bay, South Africa.

Illustrated throughout with magnificent images of White sharks, this book is essential reading for anyone who is concerned about understanding White Sharks behaviour.

Diving with sharks and other adventure dives