The Club, by Edyth Bulbring 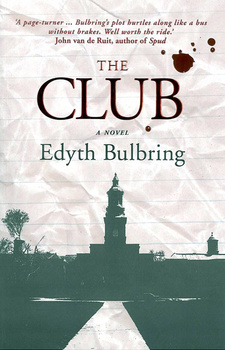 With wonderfully drawn characters and a riveting plot, Edyth Bulbring, in her novel The Club, paints an extraordinary and often chilling portrait of the life of the young elite in Johannesburg today.

The man awoke to the sound of crying. His pillow was wet and the only sounds around him were the sleeping noises made by madmen. Fragments of his dream flickered through his mind: a blue-white and silver-green garden. Then the same garden, blackened and dead. The man sniffed the air. He could smell the poison. No, it was the bleach and antiseptic they used to clean the wards. Then the man recalled an image which made him smile. A group of children walked towards him, laughing loudly. The image began to fade and only two faces in the group stayed sharp. The girl had the face of Our Lady. But when she smiled, her lips curled back into a snarl which made the man shrink back against the narrow bed. Her face grew faint and he was left with the boy. His features were quite unremarkable. Except for the eyes; they were hard, yellow glass. The amber eyes grew dark until they were black holes. And then the boy opened his mouth and laughed. The man curled himself into a ball and started weeping. His cries woke some of the other patients who told him to shuddafug-gup. But he couldn't stop and the nurse came and gave him something to make him sleep. Finally, the man gave up fighting the drowsiness that would take him back to the boy with the dead eyes. Brother Peter Bellairs stopped at the security gate and waited. The guard walked around the car, wrote down the details of the number plate and passed the clipboard through the open window. As he did so, he recognised Brother Peter. 'Ag, sorry. I didn't see it was you. New car?' - 'A friend's. Mine's in the shop. It's the exhaust again.' - 'Shame, man. And you having a hotline and all.' The guard smirked. Brother Peter masked his irritation with a shrug. He scratched at his throat. The car didn't have air con; his neck was breaking out into a rash. Damn, it was hot for March. He scrawled his name onto the sheet of paper: Judas Iscariot. He handed back the clipboard and smiled at the guard. One-all. As he drove off, the sense of his pettiness overwhelmed him. Judas Iscariot indeed! He parked under the shade of a tree in front of the building. Before getting out of the car he took a few moments to check his appearance in the mirror. Tanzanite eyes stared back at him from the hard-jawed face. Extraordinary eyes. People always commented. He sucked in his cheeks and ran a hand though the thick hair with satisfaction. Just enough grey Matron didn't ask him to sign the register. There was no need - he'd been a regular visitor at the institution for the past nine months. 'How's he been this week?' - 'Same old.' She sighed. 'No appetite of course. He was very disturbed last night. The nurse had to sedate him again.' - 'And how are you?' - 'Short-staffed as usual. But we make do.' - 'I'm going to take him off your hands in a couple of weeks. The brothers have agreed to let him stay at our retreat in the Drakensberg. I am hoping he will find some peace in those mountains.' Matron nodded. 'Yes, there is only just so much we can do here. As long as he keeps taking his meds, he'll be as happy as he can possibly be.' [...]

This is an excerpt from the book: The Club, by Edyth Bulbring.

The Club is a chilling novel about the life of the young elite in Johannesburg today.

The Unlikely Genius of Dr Cuthbert Kambazuma is a Zimbabwean novel of startling originality.

Stories of Contact: For this unique and impressive anthology, some of South Africa’s top storytellers were invited to interpret the theme of touch.