The Battle of Bangui, by Warren Thompson, Stephan Hofstatter and James Oatway 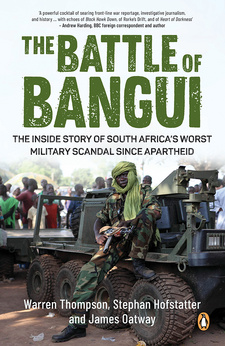 The Battle of Bangui: The inside story of South Africa's worst military scandal since Apartheid, by Warren Thompson, Stephan Hofstatter and James Oatway, is also a cracking war story filled with heroism, camaraderie, terror, pathos and triumph over adversity.

In March 2013, the news broke that thirteen South African National Defence Force (SANDF) members had been killed in clashes in the Central African Republic (CAR). This came as a bolt from the blue for most South Africans. Few had even heard of the place, let alone knew that their government was fighting a war there. The details were sketchy. Initially, the official version was that our troops had repelled a rebel attack on their base on the outskirts of the capital, Bangui, with casualties sustained on both sides. Then the SANDF disclosed that the first clash had taken place some distance from the city on 22 March. This had been followed the next day by an intense battle closer to the capital. South Africans were shocked to learn that a small force of 200 SANDF soldiers had confronted a rebel army several thousand strong advancing on the city along two main access routes. Fighting had continued into the night until a ceasefire was brokered the next morning. For those back home, many questions were left unanswered. Why were our troops forced to fight a battle in which the odds were stacked so spectacularly against them? Why were they deployed to a conflict zone without forming part of any official United Nations (UN) or African Union (AU) peacekeeping mission? What strategic or commercial interests did South Africa have in the CAR anyway? Had the SANDF simply been used to prop up an allegedly corrupt Central African dictator, Francois Bozize, in return for some shady back-room deals involving graft-tainted President Jacob Zuma and his army generals? This book, which evolved from two different strands pursued separately by the authors until they decided to combine their efforts, sets out to answer these questions. Warren Thompson's first introduction to the CAR came with an article he wrote for Finweek titled 'Conflict diamonds and SAJ. The story detailed how authorities in Belgium had discovered two consignments of diamonds in Antwerp in 2014 that were suspected to have originated in the CAR. This caused a stir, as the CAR's Kimberley Process (KP) status had been revoked over twelve months earlier, in the aftermath of the battle. It meant that the country could not export diamonds at all. Thompson's research left him with the distinct impression that there could be a link between the sale of illicit diamonds from the CAR and the deaths of South African soldiers in the Battle of Bangui. Shortly after the battle, the Sunday Times dispatched Stephan Hofstatter and James Oatway to the CAR to report on the conflict there. The visit provided them with a brief, never-to-be-repeated window of access to the rebels who had fought our troops. By then Bozize, his supporters and government soldiers still loyal to the deposed president had fled to neighbouring countries, leaving the capital well and truly in rebel hands. Heavily armed fighters filled the sidewalks or raced through the city in pickups armed with anti-aircraft guns, while foreign peacekeepers kept largely out of sight. The main SANDF force had also departed, leaving only a small special forces detachment behind at the French military base at the airport. They, too, would soon depart. Interviewing rebel commanders at battle sites where, just days earlier, hundreds of their men had been slain by SANDF troops was an unnerving experience. [...]

This is an exerpt from The Battle of Bangui: The inside story of South Africa's worst military scandal since Apartheid, by Warren Thompson, Stephan Hofstatter and James Oatway.

The Battle of Bangui

The Battle of Bangui: The inside story of South Africa's worst military scandal since Apartheid.