SuperVan & I, by Sarel van der Merwe and Steve Smith 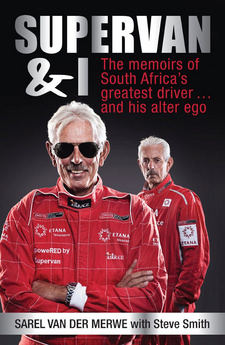 (...) I remember exactly when it all started, too. It was 1956 and I was 10 years old. We were at Palmietfontein, a now defunct racetrack that was located just outside Johannesburg, where a big race was taking place that day, and I remember British driver Peter 'Pat' Whitehead was there in his Ferrari. Whitehead was famous for being the first person to whom Enzo Ferrari ever sold a Formula 1 car, a Ferrari 125. As we watched the race, not only did I think it was the greatest thing ever, but, it turns out, so did my father. So much so that it inspired him to go out and buy a Triumph TR3, which he started rallying. He later swapped that for an MG Magnette, and by 1959 he'd bought the unfortunate Porsche Speedster I'd mentioned earlier. My father had more than a little racing talent and was, in fact, the first South African rally champion, in 1959. It wasn't an officially recognised title yet - the Pretoria Motor Club started the championship, which the following year was taken over by the Automobile Association and declared an official SA championship. Although my dad competed in a few nine-hour endurance races on the track with his friends, he concentrated mostly on rallying. My father was a privateer who had his own quantity-surveying business, so he never really competed as seriously as I ended up doing. He was also very involved in the organisational side of motor sport back then. He was, for example, involved in the building of Kyalami. We lived in Pretoria and my father was a member of the South African Motor Racing Club - they were the builders and first owners of the famous circuit when it opened in I960. He was also involved in the Zwartkops racetrack. So ja, as a young boy growing up, I was always exposed to motor sport. I guess I should, at this point, tell you a little bit more about my childhood. It's as good a time as any, we'll get back to the cars in a minute. I was born in Joburg, but we moved to Pretoria when I was about three or four. It was a pretty carefree time for me. We lived in a big home in Waterkloof, the quintessential white Afrikaans upper-middle-class family. I went to Laerskool Anton Van Wouw and Afrikaanse Hoer Seunskool. I had a lot of friends who lived nearby, so it was easy to carry on, have fun and cause shit. The shit-causing part sometimes got a little out of hand. In my final year at Affies, I got 106 cuts, which was apparently something of a school record, probably still is now that they've stopped corporal punishment. I'm actually quite proud of it. Academics were never really my thing. In primary school I was always one of the top three or four students, but in high school other pursuits attracted my interest. Plus, there were many more pupils in the classes at Affies, so I could get away with a lot more. Unlike at primary school, the teachers didn't know my parents, so I could do the absolute bare minimum without being caught. As I could pass without too much effort, I spent most of my time playing and causing kak. I could never understand why you had to swot stuff that you were never going to use again anyway. On one occasion I went to fairly great lengths to avoid studying. My parents had gone on an overseas holiday, and my grandparents had the unenviable task of trying to control me. I had a big exam coming up, one which I hadn't studied for and knew I would fail. Knowing what my father would do to me, I decided to disable my writing hand. (...)

This is an excerpt from the book: SuperVan & I, by Sarel van der Merwe and Steve Smith.

To the point is the no-holds-barred autobiography of South African Cricket star Herschelle Gibbs.