Stargazing from Game Reserves in Southern Africa, by Anthony Fairall 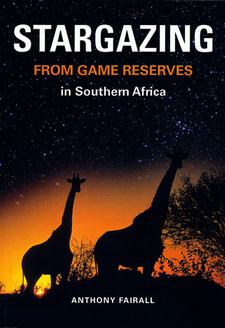 Stargazing from Game Reserves in Southern Africa, by Anthony Fairall.

Stargazing from Game Reserves? Numerous pairs of luminous eyes shine back in the light of my headlamp. I am standing outside a rest hut in Umfolozi. From the introduction to Anthony Fairall's Southern Africa stargazing guide.

The winter night has fallen early and a herd of impala have bedded down beneath the nearby trees, unperturbed by the roving hyena that earlier made off with the lamb chops by the braaivleis fire. The eyes of the impala look like stars, and for a moment the stars above seem like staring eyes. I extinguish the headlamp as my gaze travels upward. There is the centre of the great city of stars in which we live. Rarely can one see it so clearly. The power generator has been turned off and not a single artificial light is in sight. After a day immersed in the beauty of the natural world, there is no reason to stop just because the sun has set. A game reserve is not only ideal for viewing animals but also the ideal location from which to view stars. The best way of seeing stars is to go somewhere where there is as little artificial light as possible. Game reserves provide the perfect setting. In centuries past it was not necessary to go to game reserves to see animals, or to see stars. In van Riebeeck's time, lion, elephant and other big game abounded in the Cape Peninsula, let alone the rest of the subcontinent. For example, Franschhoek Pass - only an hour's drive from Cape Town - was originally an elephant trail. (Elephants, like humans, sought the easiest and most sensible routes in crossing mountain ranges.) Sadly, widespread hunting destroyed their paradise. The establishment of farms and the development of towns and cities drove away the remaining animals until only pockets of the natural world were left, the game reserves of today. Strangely enough, the same is true of stars. It seems odd, because you only have to look upwards to see the night sky, regardless of where you are situated on the surface of the Earth. Indeed, up until the 1960s that was true. Many enthusiastic amateur astronomers set up telescopes in their own backyards, and professional observatories operated in major cities. Both Cape Town and Johannesburg have suburbs named 'Observatory', after the institutions they hosted.

Over the past few decades, however, the stars appear to have dimmed with advances in technology having resulted in much more efficient ways of generating light. Outdoor lighting, in particular street lighting and 'security' lighting, has become a ubiquitous feature of suburbia. Today sporting events are regularly held at night, something that was not possible years ago. We have the technology to generate enormous amounts of bright light. The problem with such light is that it not only illuminates the ground below, but also the atmosphere above. Astronomers were the first to become aware of this. Even in cities, it used to be possible to see stars against a black sky. However, when the sky is no longer black, but grey, it is more difficult to see the fainter stars. Astronomers found it increasingly impractical to work from city observatories. Since the 1960s, cities have grown larger and more populous, and their light output has increased immensely.

Fortunately, city engineers have realised that light that shines straight up into the sky is wasted light, and thus wasted electricity, and they have designed more effective light fittings to cut down on 'light pollution'. However, we can only see the brighter stars from the cities. The best way of seeing stars is to go somewhere where there is as little artificial light as possible. Large stretches of the Karoo are one possibility. That is where we astronomers migrate when we want to study the stars nowadays, but, as an amateur, unless you are extremely dedicated, you are unlikely to make a special journey to the Karoo. Game reserves, which have very little artificial lighting are ideal for stargazing. In general, South African winters provide fine and clear weather, and these are the perfect conditions for stargazing. If you are visiting a game reserve in this season (or any other for that matter) you are likely to be carrying warm clothes, a torch and a pair of binoculars for gameviewing by day and these should prove to be just as useful during your 'game' viewing activities at night. [...]

This is an excerpt from the book: Stargazing from Game Reserves in Southern Africa, by Anthony Fairall.