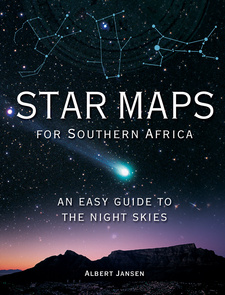 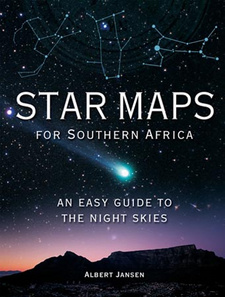 Albert Jansen’s Star Maps for Southern Africa provides thorough and extensive coverage of our nights skies in the southern hemisphere, enabling readers to track stars and related spectacles throughout the year. It will remain relevant for a lifetime.

Star Maps for Southern Africa is the first star guide of its kind in the southern hemisphere. It features 96 star maps for observing the southern skies with the naked eye, standard binoculars or a small telescope. Divided into 12 sets, the maps cover all eight principal views of the sky (N, NE, E, SE, S, SW, W, and NW) for each month of the year and for different times during each night. For each set of star maps, the reader is alerted to prominent stars and constellations visible during that period of viewing. Terms and concepts are explained and frequently asked questions are addressed. The maps are uncluttered and easy to read, drawn to a standard size on a generous scale. They enable progressive viewing of the sky at two-hourly intervals, taking into account the movement of the Earth and 'changing' views of the sky and  allow 360° viewing through all compass points. They are designed to encourage readers to pencil in their own connections between stars, and to draw in and track planets and their paths. The design shows black stars on a white background to ensure clarity and ease of use at night. New Moon tables list all moonless nights, enabling readers to plan star-watching on the darkest nights. MAP SET 11: NOVEMBER AT 21 H. USE ALSO IN OCTOBER AT 23H, SEPTEMBER AT O1H, AUGUST AT 03H, JULY AT 05H. AT OTHER TIMES IN NOVEMBER, USE: SET 12 AT 23H, SET 1 AT 01 H, AND SET 2 AT 03H. The horizon now coincides with the plane of our galaxy's 'disk'. Consequently, the Milky Way is low in every direction, and the sky's summit seems to be devoid of stars. The night sky reveals that the Milky Way Galaxy is not spherical but is a flat disk (like many other galaxies). Galaxies become this shape through the interplay of gravity and rotation. The Sun and its neighbours orbit near the edge of the Milky Way Galaxy so fast that they cover a few hundred kilometres each second. Yet it takes each star a few hundred million years to complete just one orbit, because our galaxy is so huge. Looking North, you can see the constellation of Pegasus with the four stars of the Spring Square. It points the way to the constellation Andromeda, which contains our neighbouring galaxy, visible to the naked eye as a distant blur. You may see the Andromeda Galaxy better through binoculars. In the North-East, the constellation of Cetus fills a large part of the sky. All the stars in this constellation are dim, except the one named Diphda. Very low in the sky are two star clusters, the Pleiades and the Hyades in the Taurus constellation. They are real beauties when seen through binoculars. Shining low in the East is the splendid Orion constellation. See how blue Rigel contrasts with red Betelgeuse. Near Orion's Belt (three stars in a row) is the famous Nebula. Bright Sirius is visible to the right and is so close to the horizon that its vivid twinkling may frighten the naive observer. Low in the South-East, you can see Canopus. Far above is Achernar, indicating one end of the huge, meandering 'river' Eridanus. The other end of Eridanus is near Rigel in Orion. [...]

This is an excerpt from the star guide: Star Maps for Southern Africa, by Albert Jansen.

Star Maps for Southern Africa is the first star guide of its kind in the southern hemisphere and features 96 star maps for observing the southern skies.

First Field Guide to Skywatching in Southern Africa is a fascinating insight into the southern skies by night.