Spanner in the works, by Pat Fahrenfort 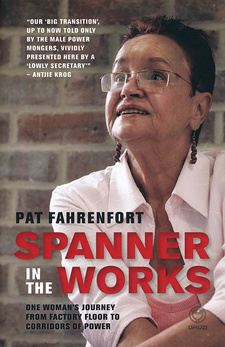 Pat Fahrenfort's life story, Spanner in the works, captures the daily struggles by ordinary working class people who had to negotiate their way through an unforgiving system.

From the school bench to the factory floor

I didn't know what to expect from my first job, certainly not that I'd be working until my fingers bled. It was 1960 and the year I came of age. I was fifteen. With my slight build and short stature I was often mistaken for a boy or a young child, so I began wearing my hair loose on my shoulders, the top part teased up Brigitte Bardot-style with a fringe over my too-broad forehead, and I would fill up my bra with cotton wool. "As jy wil ougat wees, moet jy gaan werk," my mother would say when my sisters and I wanted to dress up. My parents believed that when you began to fret about your appearance, you were old enough to work. And so I was taken out of school to help stretch the domestic income. I found myself pushed into a world of grown-ups, the world of work. It was not what I wanted and, looking back, I realise it was perhaps not what my parents wanted either. I sensed that my father was keen for his daughters to complete matric, being of the view that there were better job prospects for those with a proper qualification. But my mother was always more concerned about the present, and at the time, money was a serious concern. Although we were not exactly poverty stricken, leaving District Six to move into a brand-new house on the Cape Flats had various financial implications. There were additional travelling expenses each day, as we all had to return to the city for work and school, and, during times of need, we could no longer rely on credit from Mr Fakier's corner shop. My mother also had to give up her job as a machinist in a clothing factory because she was pregnant. With seven mouths to feed on only my father's salary, we lived from hand to mouth until pay-day at the end of the month. I don't know how much my father earned, but it never seemed to be enough. In the late 1950s there was already talk that District Six was going to be declared a white area. To save our family from the humiliation of being told when and where to move, my father proactively set the wheels in motion to find us a new house. To appease the coloured community, various housing schemes were developed by the City Council. Garlandale, which was situated on the edge of the Cape Flats, was the first coloured housing scheme of its kind to be developed. My father was employed by the City Council as a meter reader, so he qualified to purchase a house there. My siblings, Dicky (two years older than me), Jean (one year older than me), Julia (five years younger) and I were excited. We were going to move into a freestanding house with hot and cold water, a bathroom and a toilet inside the house. In District Six our toilet had been outside and we'd had no bathroom. The new house was bigger than the one we'd had before, where at times we'd shared two rooms between more than ten people. It had three bedrooms, a huge lounge area with a reasonably sized kitchen, and big gardens at the back and front of the house. Jean, Julia and I shared a room. [...]

This is an extract from the memoirs: Spanner in the Works, by Pat Fahrenfort.

Spanner in the works

Spanner in the works is an unflinchingly frank account of one woman’s resolve to speak truth to power, irrespective of where she discovers it.

My Dad – By South African Sons

A collection of stories about things said and not left unsaid

Herman Charles Bosman. Between the Lines

Between the Lines is a biography of Herman Charles Bosman, one of South Africa’s best short story writers and essayists.

A Life in Transition. Alex Boraine