Sounds of the African Bush, by Gordon King and Doug Newman 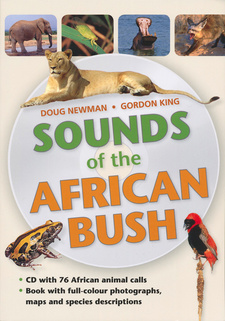 An invaluable resource for nature lovers of all ages, Sounds of the African Bush by Gordon King and Doug Newman, will provide a new way of recognising the varied sounds of Africa's wild areas.

Sounds from the African bush are complex and diverse: a chorus of chirps, grunts, croaks and growls. The calls vary widely, but many evoke wild Africa, from the African Fish Eagle's plaintive cry to the lion's resonant roar and the hyaena's eerie whoop. Animals use sounds for a variety of reasons, from defending a territory to giving warnings, attracting a mate, locating food and communicating over distance. The breeding season brings an increase in vocalisations for almost all animal species. These sounds are usually strongly tied to mating rituals, displays and the proclamation of territory. Knowing basic animal life histories (e.g. feeding time and mating season) will help in the identification of a species based on its calls. For example, many predatory animals, like owls and cats, are typically heard at night as they hunt for food, while most birds are active during the hours around sunrise and sunset. In general, birds tend to have beautiful, melodious and varied songs (though some can make harsh or grating sounds). Frogs have a diverse array of calls, ranging from croaks to high-pitched whistles - some of which even sound similar to bird song. Insects are a diverse group, with an equali / diverse range of sounds, though they often produce shrill and high-pitched sounds. Mammal calls are also highly variable, but are dominated by loud grunts and roars that can often travel long distances. With more than 950 bird species, 200 mammal species and myriad frog and insect species, a comprehensive collection of African wildlife calls would be vast. The aim of this book is thus to provide a general introduction to the calls of the most commonly heard. Please listen responsibly! Animals may be disturbed by the sound of their own calls or by the calls of other species. If possible, please do not play these calls in the wild, as they may interfere with animals' behaviour. This book, together with the CD, will help you to recognise some of the amazing sounds made by our African fauna. Sounds of the African Bush features a photograph and information on 76 species likely to be encountered in the African bush. A map within each entry shows where in Africa the animal occurs. Play the CD to listen to the calls of the species in this book. Use the CD in conjunction with the book to see photographs of the animals as you learn about them. Once you learn to recognise the calls of the bush, you will be able to build up a picture of the nearby animals, and perhaps even spot them. [...]

This is an excerpt from the guide and Audio-CD: Sounds of the African Bush, by Gordon King and Doug Newman.