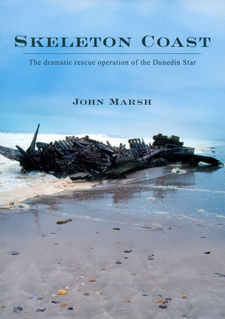 John H. Marsh's report on the ship wrecking Skeleton Coast is about the most amazing rescue operation that took place before Namibia's coast. Since then the ship's name, Dunedin Star, has gone around the world.

John H. Marsh's report on the ship wrecking Skeleton Coast is about the most amazing rescue operation that took place before Namibia's coast. Since then the ship's name, Dunedin Star, has gone around the world.

[...] It is the coastline of the Kaokoveld that particularly concerns this story. As has already been mentioned, most of it is unknown territory to Europeans. The coast itself is uninhabited, and only one white man has ever claimed to have travelled the 500 miles of its length, from Walvis Bay to the Kunene River that separates South West Africa from Angola. He is an old German now living at Swakopmund, and his story is that he made the journey some 60 years ago with four donkeys, loaded with food and water. The only other white men who have visited the coast at all are diamond poachers, police patrols, and shipwrecked folk. None stayed to explore. They went back the way they had come as soon as they had completed their business, or, at last abandoning hope of rescue, died among the sands. Mariners have good cause to fear this coast. Its white sands are strewn with the skeletons of ships and men. Many indeed are the ships that have stranded here, and few indeed are those that have escaped to make another port. And of the crews and passengers that found themselves castaways on this coast of death, only a handful survived the tortures of hunger, thirst, and exposure till rescue came. Countless skeletons lie beneath the sand dunes or bleach white in the blazing sun. Nobody will ever know their identity. Some of the ships, too, whose timber and iron frames stand out blackly against the white surf and sand, could provide the key to ocean mysteries that have puzzled the world for generations. Their wrecks were never recorded. They were simply posted "'missing at sea". There is no more treacherous coast in the world than this. Not only has it never been completely charted, but such charts as have been drawn by observation from the sea are unreliable. The shore supports little or no life, but it is alive itself. It moves. Day by day, month by month, it is moving westward, further and further out to sea. Not only do the charts, poor as they are, prove this. There is visible evidence in the wrecks of ships that are today high and dry in the sand, far from the water's edge. Best-known of all is that, further down the coast, of the German Woermann liner, Eduard Bohlen, which stranded in 1909 and is today well over half-a-mile inland. She rests on an even keel, with masts and funnel still standing, for all the world as if she were sailing through the desert. Natives from a near-by copper mine often take up their abode in her and then lights shine again at night through her port-holes. Prospectors looking for diamonds once dug into a sand hill hundreds of yards from the beach, and found an ancient galleon. She must have lain there for centuries. Traces of an ocean beach have been found as far inland as seven miles from the water's edge. While the coast creeps seaward it changes its contour and appearance. Nearly a century ago a Captain William Messum, exploring part of the Kaokoveld coast from seaward, recorded that he had found a small harbour, "with a good road leading from it into the interior" at a place called Cape Frio (locally known as Rocky Point). [...]

This is an excerpt from the book: Skeleton Coast. The dramatic rescue operation of the Dunedin Star, by John H. Marsh.

Skeleton Coast. The dramatic rescue operation of the Dunedin Star

The ship Dunedin Star ran aground at the Skeleton Coast, followed by a dramatic rescue operation in 1942/1943.

The 1958 edition of the book Skeleton Coast was written by Lyman Anson, and was based on John H. Marsh's first edition of 1944.