Of Silk and Sand: The origin, life and times of the lion and leopard, by J. du P. Bothma 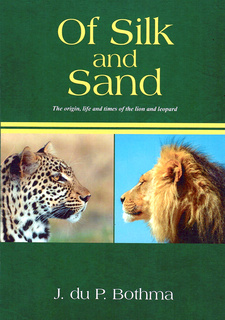 Of Silk and Sand: The origin, life and times of the lion and leopard, by J. du P. Bothma, attempts to open a window onto the role that lions and leopards play in the mysteries of the natural world of Africa.

The life and times of the Kalahari are written on a vast sea of sand and a succession of expert San trackers have allowed me to build up a step-by-step record of the habits of a variety of leopards on 2608 km of leopard tracks over an intermittent period of 185 days over 19 years. These data have revealed information which could never have been obtained in any other way. From intermittent visits to base camps at Dankbaar and Loffiesdraaj windmills in the northern interior of what formerly was known as the Kalahari Gemsbok National Park of South Africa, the habits of the Kalahari leopards slowly emerged. This northern region of the South African portion of the Kgalagadi Transfrontier Park consists of open woodlands and plains with broad valleys between bare-crested dunes. While tracking leopards in the sand was not difficult most of the time, it was the ability of the trackers to interpret what the tracks showed which was crucial to the research. When the rain washes out the tracks to some degree it is the pattern and spacing of the vague footprint indentions that allow tracking to continue. As the Kalahari is prone to high winds and summer rain storms late in the afternoon, it therefore at times required great patience and skill to follow the tracks when they were made before such winds and storms because all of the tracks which then remained to be seen were faint hollows in the sand. Then the trackers worked in pairs with one stopping at the last visible track to determine the direction of movement while the other tracker scouted ahead for more tracks in the direction of movement, only to repeat the whole process. When the tracks which were left after the wind and rain were found, tracking was a pleasure because the leopards then left clear imprints of their tracks in the wet sand. A leopard walking along at ease will leave a row of footprints which are spaced evenly apart with the rear foot being placed slightly behind and to one side of the opposite front foot. This leaves a row of two parallel sets of footprints, with each foot's track spaced a normal stride apart. In an adult male, this stride is usually about 1 m in length, but in a female it is a little less. When moving forward, the rear footprint appears between the two consecutive front footprints on the same side. However, when a leopard walks more hurriedly it takes longer strides and the rear footprint may partially or entirely cover that of the front foot. When tracking two leopards, such as a male following a female or vice versa, one would step on the footprints of the other until they meet, after which they would alternately step on each other's footprints. When tracking, the tracks of small rodents which are active by day are used to determine the time when a leopard's tracks were left by checking to see which animal steps on the other's tracks. Moreover, when it rained the timing of tracks can be related to before or after the rain.  [...]

This is an excerpt from Of Silk and Sand: The origin, life and times of the lion and leopard, by J. du P. Bothma.

Of Silk and Sand: The origin, life and times of the lion and leopard

Of Silk and Sand: The origin, life and times of the lion and leopard is the end product of many years of studying lions and leopards in the Kalahari.

Written in the Sand: The origin and nature of the southern Kalahari

Written in the Sand: The origin and nature of the southern Kalahari, its conservation history, the Kalahari San people and decades of research there.