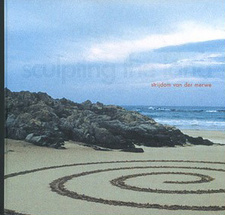 Strijdom van der Merwe, in the preface of his book Sculpting the land, is compared to a Southern Shaman. In the ancient language of the first people of Southern Africa, the San, he was known as Igiten - a designation phonetically related to the Xhosa word igqirho, still in use today, acknowledging the status of the shaman.

It was and is a very important position among the people - one that holds together, as it were, the structure of events, past and future; the edifice of communal dreams, ancestral traditions, power and enlightenment. In his essay "Praise to the Bushman Ancestors of the Water" (Miscast, edited by Pippa Skotnes, UCT Press, 1996), anthropologist Frans Prince stresses the importance of location in those early San ceremonies presided over by the shaman in which the “space-time dimension is a dynamic feature relating to their continuous interaction with diviners in the spirit realm."

Of course, interaction and sharing that communion may be froward in the contemporary multicultural, growing global realm. But the ancient imperative of space and time - spatial specifics and narrative aptitude - may offer succour. It is with this in mind that a place is found for the important modern-day land artist'. If the Igiten too would evoke the full presence of nature in his duties, the 'space-time dimension' is completely governed by the environment in which the contemporary artist works. The portent of Strijdom van der Merwe as land artist' from Southern Africa garners symbolic enrichment in this context. It is the ancient land of Africa that speaks and that he directly or indirectly evokes. Wherever he goes to make his 'interventions' in nature - and the artist is working widely and all the more internationally - he will bear the symbolic mark of his ancestral Igiten.

There may be a deep irony in the fact that the 'movement' which broadly defines the (very diverse) group of artists who work devotedly, some would say obsessively, within nature only - the way Strijdom van der Merwe does - is founded primarily in their objection to the materialistic and the superficial prevalent in so-called Western culture. Edging towards the political, or overtly, committedly so, some 'land artists' find themselves in the orbit of passionate environmentalists: Greenpeace members with paintbrushes. Others are open-hearted romantics, lyricists singing of the gods' beauty. "I like to see art as being a return to the senses," Richard Long pleads (Walking in Circles, Thames & Hudson, 1991).

Another strand in this tradition that emerged halfway through the previous century, presents artists who push the Sisyphean rock for art itself. They wish to return to the primordial action of art making itself. They want to demonstrate the metaphysics that defines the artist as the force that intervenes in nature, that brings 'order', which, in turn, 'marks' human presence - physical or spiritual. Of course, this occurs in respectful harmony with nature. And could be densely personal and private. The famous British 'environmental sculptor' Andy Goldsworthy elucidates in Wood (Harry N. Abrams, 1996):

"A stone is passive, a witness to the place in which it sits; it is a focus, the core, the remains of something that was larger; its movement is one of erosion ... A tree is an active part of its place, it makes that place richer and is an indication of the way something can change a place - in this respect it is a lesson to me about my own life as a sculptor. A tree is close to the gesture of a leaf or stone throw, but over a much longer span of time, during which it thrusts up and reaches out into space before decaying and dropping back to the ground."

Sometimes the artist's intervention is slight: Goldsworthy has simply thrown sticks, pebbles and grass up into the air that, in falling back to earth, 'formed' 'sculpture pieces'. These are then photographed and thus recorded. Photography plays an important role in the genre of the land artist. (This book, as well as very successful publications by the likes of Long and Goldsworthy, presents and accounts for that aspect of the artist's working methods.) However, although such pictorial documentation - often done with great skill and aesthetic expertise - is made and exists to 'verify' the creative process, it is not the artwork itself. In this sense, the pictures in this publication place the viewer under an obligation to reconstruct, to imagine the circumstances in which Strijdom van der Merwe intervened in nature, in time. These are records to be explicated and its codes are to lead us back to the structures of events devised by the artist.

Like in the stratagems of the old African shaman, that space-time dimension had passed in nature, and yet something had changed - even if only the flutter to the ground of a leaf. That paradox is Strijdom van der Merwe's cheerful inspiration: "It's an art of the unknown. Each time the material/medium/place itself is a revelation." These could well be the works of a latter-day Iglten, enticing us to revel in unchartered experience and knowledge.

This is an extract from the book: Sculpting the land, by Strijdom van der Merwe.

Sculpting the Land is about the art of Strijdom van der Merwe and transient creations before they fade, are blown, or washed away.