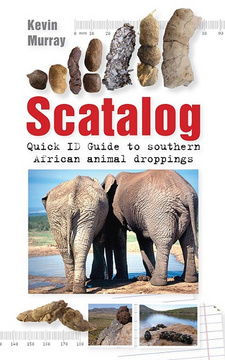 There is basic information on how to distinguish between the main animal groups; and more detailed information (and many photographs showing actual size) on about 100 individual species. These include mammals, birds, reptiles, insects and frogs. Remember that animals will not have read the rules contained in this guide! Expect to see variation. Use your common sense. Have fun. And be safe: animal scats can transmit diseases, worms and parasites, so avoid handling them.

How to use this guide: The photos are the simplest identification tools. They show typical, well-formed scats. Many photos are actual size; those that are not show a scale of either 5 or 10 cm. Remember that much variation in shape can occur. Also, some scats, such as those of antelope, can be difficult to tell apart, so other knowledge and further observations are often necessary for identification. Based on the scat shape, and once scat attributes have been closely observed, choose the appropriate table (pages 15 and 22-23). Perhaps the most easily identified shape is the pellet, typically produced by the giraffe and by antelope in general. The first table covers antelope (and giraffe) pellets. The second table covers scats that do not have this pellet shape. Note that this guide contains some animal scats that do not occur in the tables; and that the tables also contain information on some animals for which there are no photos. Therefore, always consult both the tables and the photos.

This is an excerpt from the guide: Scatalog. Quick ID guide to Southern African animal droppings, by Kevin Murray.