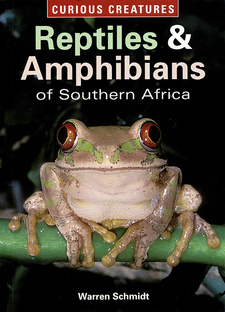 Warren Schmidt, author of Reptiles & Amphibians of Southern Africa, has enjoyed a lifelong interest in reptiles and amphibians, and is a long-standing member of a number of herpetological societies.

What threats do amphibians and reptiles face?

Threats to biodiversity can be broken down into two broad categories - habitat destruction and environmental degradation. Habitat destruction is the rapid alteration of the environment through logging, clearing, bulldozing and urban development; where plants and animals are wiped out over a short period of time. Exploitation and unsustainable hunting could also fall into this category. Environmental degradation represents a more prolonged effect that could be detrimental to life, and includes erosion, global warming, and leaking toxic chemicals - in other words, the effect is not immediately noticeable. The greatest threats facing southern Africa's amphibians and reptiles are:

This is by far the greatest threat facing amphibians and reptiles. While agriculture is a necessity, land is poorly managed and vast tracts of wasteland (former agricultural land) are not reused throughout southern Africa. Virgin forests, grasslands and deserts are ploughed over. Eastwood's Long-tailed Seps is presumed extinct as a result of forestry practices in its former montane grassland in the Northern Province. The Sungazer and Geometric tortoises have lost vast areas of their former habitat as a result of agriculture. Urban expansion has also threatened numerous species, by taking up land and polluting the surrounding areas.

The muti and pet trades

Exact figures are impossible to determine, but thousands of tortoises, lizards and pythons are caught and killed to supply the trade of the traditional he Various parts of the reptiles are used to make traditional medicines, and s specimens are collected for food. In the last few decades, it has become increasingly popular to keep rep and amphibians in captivity. Hundreds of rare and threatened species are smuggled out of the region every year to supply overseas markets. While legitimate keeping of reptiles and amphibians can be a rewarding, educational and interesting hobby, it needs to be regulated and controlled to ensure threatened species are not further harmed or abused.

Predicting how many reptiles and amphibians are killed by traffic on roads is practically impossible. Ongoing research by the author has indicated that where between 100 000-1 000 000 snakes are killed annually on South African roads alone. Trying to find a practical solution to this problem is a huge dilem i, as it is not possible to shut down the transportation infrastructure. Public awareness and education may help to alleviate the problem.

Why conserve amphibians and reptiles?

Amphibians and reptiles, like all biological organisms, play an essential role in the intricate balance of nature. Removing these links can have a roll-on effect, disturbing or upsetting the balance of other plants and animals. Crocodiles play a vital role in water systems, maintaining an aquatic balance. Many snakes feed on rodents that would otherwise destroy tracts of vegetation and agriculture. Lizards and frogs keep insect populations in check and in turn provide food for hundreds of other animals. If nothing else, amphibians and reptiles are simply beautiful and interesting creatures that have survived against all odds, and deserve all the protection we can afford them.

This is an excerpt from the guide Reptiles & Amphibians of Southern Africa, by Warren Schmidt.

Reveals the habitat, diversity, reproduction and diet of reptiles and amphibians of Southern Africa.